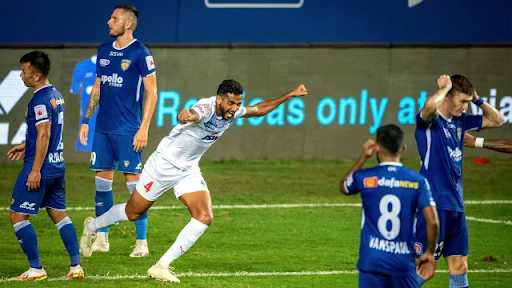 Bengaluru won the previous installment of this Southern Derby

The stage is all set for the much-awaited Southern Derby, as Bengaluru and Chennaiyin will square off in ‘Match 72’ of the 2021-22 Indian Super League at the Athletic Stadium on Wednesday.

After a challenging start to their campaign, Bengaluru has finally found their amulet and is now looking formidable enough to be a contender for the semi-finals. With 14 points from 12 matches, Marco Pezzaiouli’s team is placed in the eighth position in the league standings.

On the other hand, Chennaiyin might not have been the most flamboyant team of the competition, but their resilience makes them hard to play against. Having accumulated 18 points from 12 matches, Bozidar Bandovic’s team is occupying the fourth position and will have a chance of claiming the top spot with a win over their rivals.

Bengaluru is among the three teams to have remained unbeaten in their last five fixtures, with ATK Mohun Bagan and Kerala Blasters being the other two. The Blues have accumulated five points from their last three fixtures.

A Sunil Chhetri goal helped them secure a 1-1 stalemate in their last match against Goa, while the two matches before that saw them handing reigning champions Mumbai City a 3-0 drubbing after playing out a 1-1 draw against East Bengal.

Chennaiyin has experienced every possible result in their last three fixtures – win, loss, and draw, which highlights their lack of consistency. They registered a 2-1 triumph over NorthEast United in their previous encounter.

It was an important victory for Bandovic’s men as they were winless in the two fixtures preceding the clash against the Highlanders, drawing 1-1 against Hyderabad before losing out to Goa by a slender 1-0 margin.

Bengaluru holds the upper hand in this particular Southern Derby, as they have won five of the 10 meetings against Chennaiyin. The Marina Machans have had the last laugh on three occasions, with two matches not producing a winner.

The first meeting of this season produced a 4-2 thriller which ended in Bengaluru’s favor. Cleiton Silva, Alan Costa, Udanta Singh and Pratik Chaudhari got their names on the scoresheet for the Blues, while Mirlan Murzaev and Rahim Ali were on target for the Marina Machans. 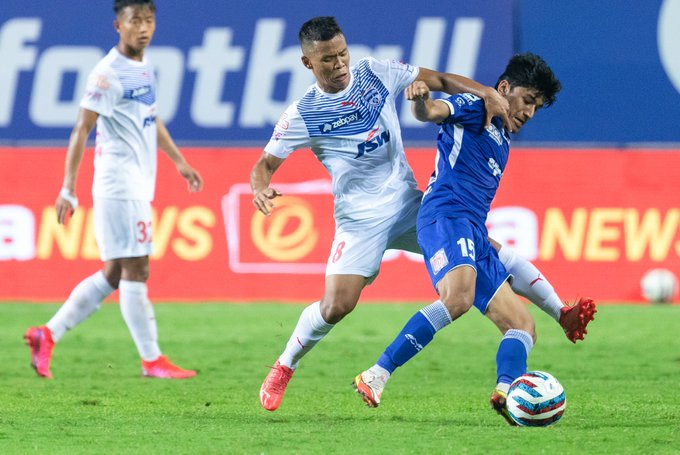 Pezzaiouli would have ideally preferred fielding the same starting XI that drew against Goa as his team did not do much wrong, but he will have to make at least one tweak. Danish Farooq will be unavailable for this game, as he needs to serve a one-game suspension after picking up four yellow cards.

Suresh Singh is expected to take up his place in the middle of the park, which will also force the German tactician to switch back to a 4-3-3 formation. Ashique Kuruniyan sustained an injury in the last game, but the Blues camp will be hoping for the full-back to regain fitness ahead of the match.

Bandovic is also expected to make one change to the Chennaiyin team that defeated NorthEast United. There is seemingly no end to Nerijus Valskis’ goal drought, as the Lithuanian striker was once again below par against the Highlanders.

He is expected to make way for a player who knows all about scoring against the Blues – Murzaev. Despite missing quite a few gilt-edged chances in the last match, Rahim Ali’s tenacity is expected to help him retain his place in the team.

Though Bengaluru is ahead on head-to-head records, Chennaiyin has had a better overall campaign so far. Hence, we have predicted a 1-0 win for the Marina Machans.