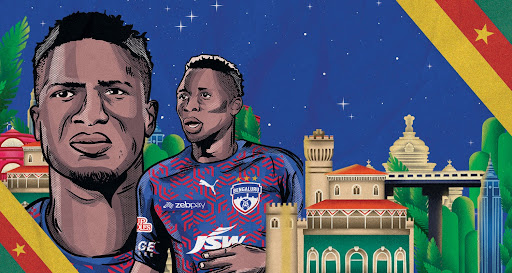 2018-19 Indian Super League champions Bengaluru have acquired the services of Cameroonian defender Yaya Banana for the remainder of the ongoing ISL season.

Central defender Yaya Banana is pleased with the move to the ISL and vowed to use his experience in India ahead of his move to the Karnataka-based club.

“I’m very happy to sign for Bengaluru FC. The ambition is simple, and that is to finish the season well and in the top four. Coach Marco made me understand that with my experience of playing in Europe and Africa, I can contribute until the end of the season. I can’t wait to meet my new teammates and to do well in the remaining games.”

Banana started his professional career at Tunisian club Tunis before moving to Ligue 2 club Sochaux which also involved a loan move to a Swiss club.

The 30-year old defender then moved to Greece and spent three seasons with Platanias before signing with Olympiacos where he did not make a single appearance thus forcing the club to cancel his contract.

The journeyman spent a single season in Jordan before deciding to sign with ISL club Bengaluru.

Bengaluru head coach Marco Pezzaiuoli welcomed the club’s latest recruit and is glad about having more options to choose from in the defense where they lost Yrondu Musavu-King to a season-ending injury.

“It was during the COVID outbreak in the squad where we lost several players, that we took the decision to sign Yaya. We also lost a key player in King through injury for the season and we had to make sure we covered that position. In Yaya, we have a good player to do that for us. He has the experience of playing in clubs around the world and for the Cameroon national team, with whom he was part of the Top XI players in the Group Stages of the 2019 African Cup of Nations.”

The former Germany U18 manager further praised the attitude and experience of the defender across the world who has represented a European giant like Olympiacos and would certainly help in grooming the young defenders at Bengaluru.

“He has a good attitude on and off the pitch, and the ability to strengthen and stabilize our defense while helping our young players develop, as we enter a crucial phase in the competition. I wish him the best and we’re looking forward to having him join training at the earliest.”

Banana has 67 caps for Cameroon and would be expecting to be a key figure for the Blues who face Jamshedpur on Saturday.