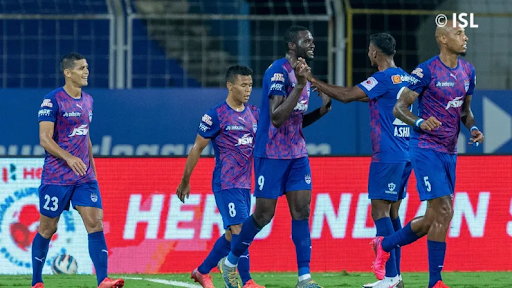 Bengaluru returned to winning ways as they brushed aside Mumbai City by a 3-0 margin in ‘Match 56’ of the 2021-22 Indian Super League season. Congolese forward Prince Ibara scored a brace for the Blues while the other goal was netted by former Real Kashmir midfielder Danish Farooq.

The Islanders head coach Des Buckingham was without his midfield lynchpin Ahmed Jahouh as the Moroccan was suspended after receiving four yellow cards. Odisha loanee Vinit Rai replaced him in the middle of the park while Bradden Inman and Ygor Catatau were also handed starts with the English tactician taking a bold decision of benching star striker Igor Angulo.

On the other hand, Bengaluru head coach Marco Pezzaiouli switched back to a four-man backline with Pratik Chaudhuri getting the nod ahead of Parag Shrivas in defense while Farooq replaced Jayesh Rane in midfield.

The defending champions were quick to get off the blocks as Bengaluru custodian Gurpreet Singh Sandhu was called into action very early with Cassinho pulling the trigger in the second minute of the game.

However, Bengaluru took the lead against the run of play in the eighth minute courtesy of a stunning long-range effort from Farooq. Despite being slightly off-balanced, he struck his shot so sweetly that Phurba Lachenpa could only be a spectator. Minutes later, a clumsy Vignesh Dakshinamurthy tackle on Roshan Singh sparked penalty claims but experienced referee CR Srikrishna was uninterested.

Roshan did get his revenge eleven minutes later when he whipped in a delectable ball from the right flank which was headed home by Ibara past the Mumbai City custodian to double Bengaluru’s lead. This goal acted as a spring in their steps as they almost found a third when the Congolese striker made a darting run down the right flank and played out a pass to Cleiton Silva who was denied his goal by a sensational save from the young Phurba.

Pezzaiouli’s team did eventually score their third right at the stroke of half-time with Roshan playing the provider and Ibara playing the recipient yet again. A brilliant corner from the young fullback found the former Beerschot marksman and he jumped highest to head it past Phurba to make it 3-0.

The second half saw Buckingham bring on Raynier Fernandes, Angulo and Amey Ranawade, while Pezzaiouli introduced Sunil Chhetri near the hour mark to replace the hero of the night Ibara. 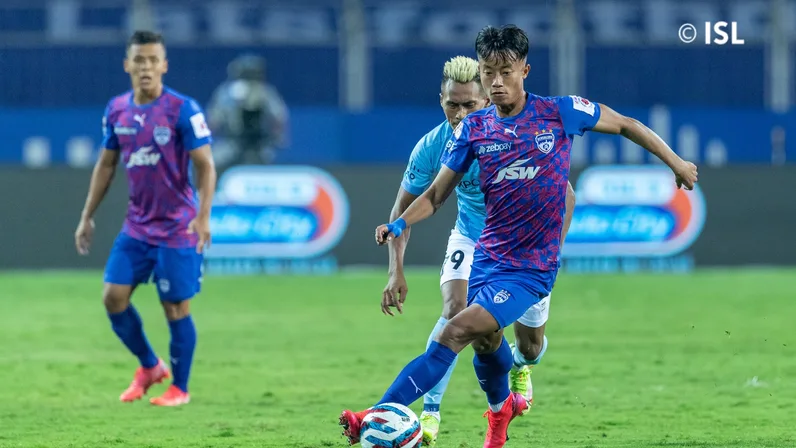 Roshan Naorem had a fantastic game for the Blues

Around the 65th-minute mark, Apuia Ralte came up with a fantastic volley but it stayed out after rattling the crossbar as the record ISL signing was once again denied his first goal for the defending champions.

With Mumbai City slowly growing into the game, the former Eintracht Frankfurt technical director proved his tactical prowess as he brought on Iranian midfielder Iman Basafa to regain control of the midfield.

The next phase of the game did not produce any clear-cut openings, but things got heated up once again in additional time. A cross from the right flank took a deflection and landed kindly for Farooq whose effort was brilliantly kept out by Phurba. On the counter-attack, Angulo got a golden opportunity to at least provide his team with some consolation but his shot was well blocked by the Bengaluru defenders.

This win has helped the Blues climb up to the seventh spot in the points table and they will now look to extend their winning momentum when they take on ATK Mohun Bagan on Saturday, while the second-placed Mumbai City will look to put an end to this misery when they will square off against current leaders Kerala Blasters on Sunday.