Bengaluru’s hopes of making it to the semi-finals turned from slim to nil, as ATK Mohun Bagan handed them a 2-0 defeat in ‘Match 61’ of the 2021-22 Indian Super League season. Liston Colaco and Manvir Singh were on target for the Mariners.

ATK Mohun Bagan head coach Juan Ferrando made only one change to the team that drew 1-1 against Odisha. Ashutosh Mehta replaced Lenny Rodrigues and was given an advanced role, with Joni Kauko dropping back in midfield.

On the other hand, Bengaluru head coach Marco Pezzaiouli made two changes to his starting XI. Ashique Kuruniyan returned after a long spell on the sidelines, replacing Namgyal Bhutia in defense. Skipper Sunil Chhetri replaced the suspended midfielder Danish Farooq and joined the front three, with Udanta Singh operating from the middle of the park.

The Blues had a bright start to the game and got a fantastic opportunity to take the lead in the 7th minute when Ashique floated in a perfectly weighted cross for Prince Ibara, but the Congolese striker failed to get his header on target.

Cleiton Silva tried his luck out nine minutes later but there was no change in the final outcome, as his attempt sailed over the crossbar. The Brazilian striker was involved once again in the 31st minute when he found Chhetri with a cross from a corner, but the skipper’s header lacked direction.

Silva squandered another opportunity in the 38th minute when after receiving a pass from Chhetri, he pulled the trigger from outside the box. However, as Bengaluru’s story has been throughout this match, his attempt lacked quality.

All of these missed opportunities eventually came back to haunt Pezzaiouli’s team as the Mariners took the lead just before half-time. As Kerala Blasters’ Adrian Luna did in the last match, Liston attempted a knuckle-ball shot from a freekick that left Bengaluru custodian Lara Sharma dumbfounded before nestling into the back of the net.

The goal acted as a spring in the steps of Ferrando’s players and the Mariners started the second half on the front foot, unlike the first half. They could have doubled their lead in the 57th minute when Carl McHugh found Liston inside the ball with a fantastic pass, but the young winger’s shot stayed out after striking the crossbar.

The Blues came close to finding the equalizer in the 67th minute when Leon Augustine’s cross from the right flank found Silva inside the box. The former Madureira player did well to turn swiftly and open up an angle for himself, but all of the good work was undone with a poor strike that went way over the crossbar. 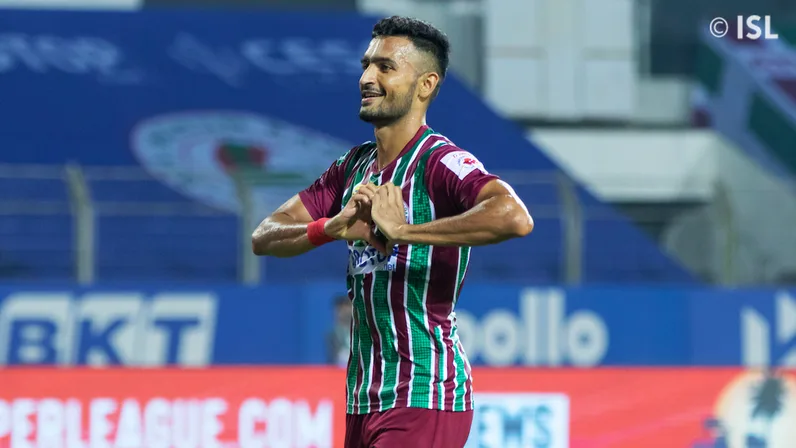 For the second time on the night, Bengaluru had to rue the missed opportunity as last season’s runners-up netted their second in the 85th minute, courtesy of howlers from Lara and Parag Shrivas. A misplaced pass by central defender Shrivas was intercepted by Manvir who then went for glory, but his shot was directed straight at the keeper and was not very powerful either. However, Lara took more time to react than he had and ended up putting in a dive when the ball was already on its way to the back of the net.

ATK Mohun Bagan remains at third place in the standings with this win, but they now are tied on points with the second-placed Jamshedpur. The Mariners’ next assignment is against Chennaiyin on Thursday, whilst sixth-placed Bengaluru will call curtains to their season with a game against East Bengal on Saturday.