Hyderabad and Chennaiyin players in action against each other

Hyderabad extended their unbeaten run in the 2022-23 Indian Super League season to six games as they came from behind to register a 1-1 draw against Chennaiyin at the Gachibowli Stadium in Hyderabad. They are one point behind league leaders Mumbai City, who have played a game less as both sides are aiming for a second ISL trophy in the last three seasons.

Hyderabad fielded themselves in a 4-2-3-1 formation with Gurmeet Singh Chahal wearing the gloves. Nikhil Poojari and Akash Mishra guarded the right and left flank respectively while Odei Onaindia and Nim Dorjee Tamang were in the heart of the defense. Hitesh Sharma and Borja Herrera held the defensive midfield positions with Mohammed Yasir, Bartholomew Ogbeche, and Rohit Danu playing a line ahead of them and Javier Siverio as the lone striker upfront.

Chennaiyin, too, took the field with a 4-2-3-1 formation. Samik Mitra donned the gloves while Akash Sangwan, Vafa Hakhamaneshi, Fallou Diagne, and V Ajith Kumar formed the back four. Julius Duker and Jiteshwor Singh played as the two defensive midfielders ahead of them with the trio of Vincy Barretto, Anirudh Thapa, and Ninthoinganba Meetei playing as the attacking midfielders. Petar Sliskovic

The first opportunity for the game fell to Hyderabad as Borja Herrera found space for himself outside the box and unleashed a curling shot. The ball dipped a bit late and nestled above the net in the fifth minute.

Hyderabad continued piling pressure as Siverio towered above his marker from Borja’s free-kick to nod the ball inches above the crossbar in the 15th minute. Siverio got another chance to find his name in the scoresheet two minutes later when he sneaked his header from Mohammed Yasir’s cross. However, the ball landed safely in the hands of the opposition goalkeeper.

Chennaiyin got their first chance of the game in the 19th minute when Julius Duker threaded a lovely long pass towards Vincy Barretto. The latter found himself one-on-one with Gurmeet but failed to beat the onrushing goalkeeper.

Duker’s cross towards the centre found a towering Sliskovic a minute later but the latter’s header was inches wide. The two sides went into the tunnel with the scoreline reading 0-0.

In the 56th minute, Ninthoinganba Meetei dribbled past two defenders but just before he could pull the trigger, Odei extended his legs to deny the former a goalscoring opportunity. Chennaiyin didn’t have to wait long for the opening goal as Akash Sangwanfound Sliskovic who made no mistake in thumping the ball into the back of the net from a corner routine a minute later.

In response, Hyderabad’s Akash Mishra swung a looping cross from one end of the pitch to another in the 76th minute but Samik Mitra came out of his line to thwart the efforts. Vincy Barretto curled an effort from outside the box in the 80th minute only for Gurmeet to palm it away. 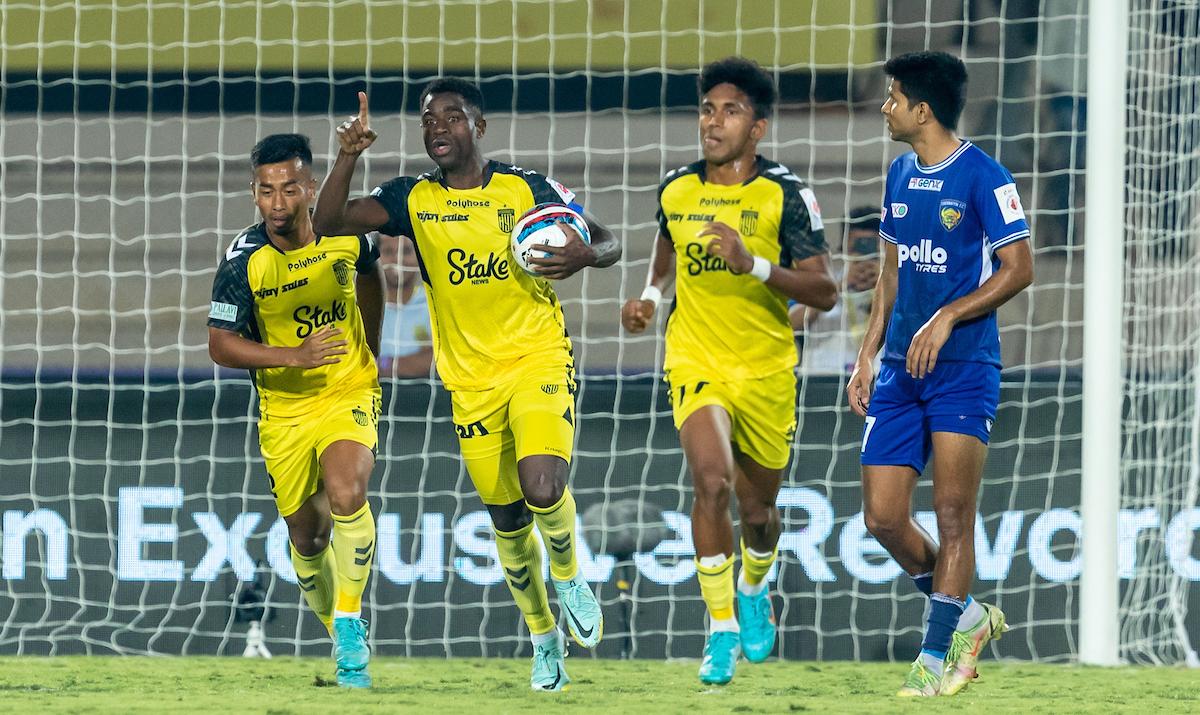 Despite being on the back foot for the majority of the second half, Hyderabad equalized in the 86th minute of the game. After losing possession inside the opposition half, Vafa tackled Siverio from behind but got not a single part of the ball and the whole of the ankle as the referee didn’t hesitate a bit in awarding the penalty.

Ogbeche smothered the ball into the bottom corner despite the goalkeeper guessing it wrong. The full-time scoreline read 1-1 as neither of the sides went home with all three points.

With 32 points from 14 matches, Hyderabad occupies the second spot and has a seven-point lead against Kerala Blasters. It looks like the race will be between Hyderabad and Mumbai to decide who will finish the league stages of the tournament at the summit. Hyderabad will travel to Kolkata to face East Bengal on Friday.

With 16 points from 13 games, this is Chennaiyin’s fourth draw in the league. With only four wins to their name, the game between them and sixth-placed Goa is widening day by day. Currently, three points separate the two sides. They will next host ATK Mohun Bagan on Saturday in Chennai.