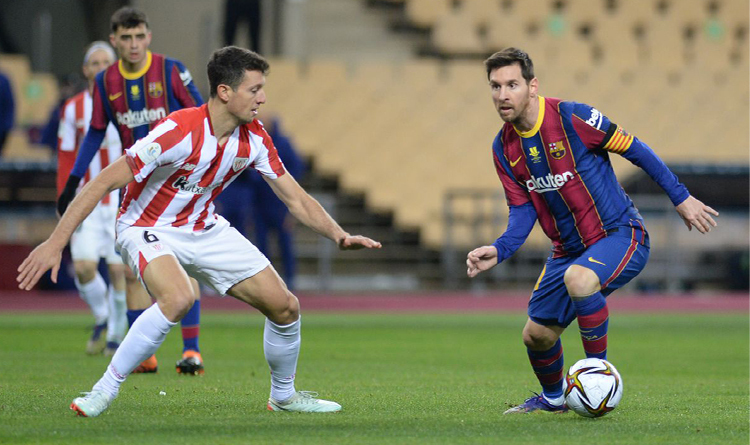 Lionel Messi with a ball

Antoine Griezmann’s brilliant performance was not enough to secure Barcelona’s victory in the Spanish Super Cup; the club from the second half of the table defeated the Catalan club in extra time.

The Frenchman’s heroics in the Supercopa de España final did not help Barcelona; he scored twice, but Athletic managed to equalize both times. Asier Villalibre, the 23-year-old forward, sent the game into overtime, scoring in the 90th minute and then the entire extra time he tormented the Barça defenders with fouls and provocations (the result of his antics will be described further below).

Finally, in overtime, the club from Bilbao exquisitely finished the opponent. Inaki Williams helped his team to get the win by converting a magnificent long shot.

Note that the underdog of the game scored the winning goal early in overtime, which was certainly influenced by the mood of the team.

Journalist Santi Ovalle published a perfect illustration of the final:

But most likely the match will be remembered not so much for the victory of Atletico as for the behavior of the Barcelona captain.

Lionel Messi lost his temper and hit Athletic forward Asier Villalibré in the back of the head with his hand.

The most striking thing is that Messi hit Villalibre after giving a good pass to the left side – in theory, in this attack Barça could still tie the score. In addition, it happened just at the very end of the match, the Argentine could not resist the anger more.

It was Messi’s first-ever sending-off for Barcelona. And how beautiful it would have been to go his whole career without a red card… 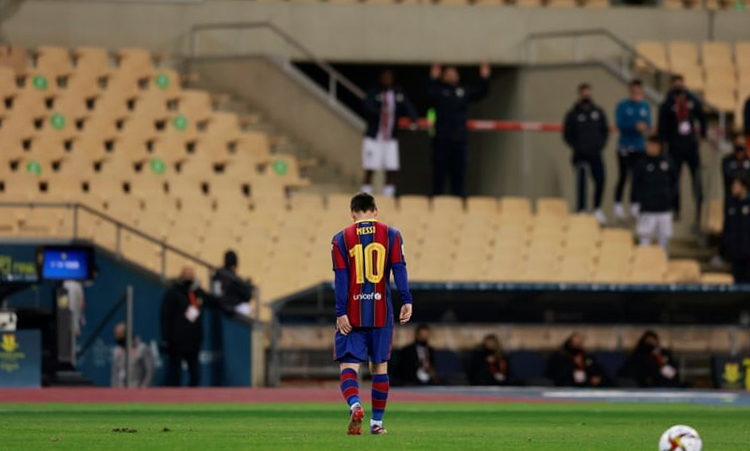 That’s how Messi left the field: he didn’t argue at all, he looked detached

Barcelona defended their captain, and Guillermo Amor was one of those to offer support, whereas Antoine Griezmann avoided the topic completely.

“It was in the last few minutes of the game,”

“There’s contact with the opponents, sometimes it happens. I don’t think you can say anything to him. Messi is a clean player. He is usually on the end of this, not doing it.”

Asier Villalibré had his own clear idea of what happened.

“All teams make fouls, and we have made them too. Messi? I put my body there so that he couldn’t go ahead, he got angry, he put his hand in my face and I think it was clear aggression.”

If the foul is considered as aggression by the Competition Committee then the Barcelona striker will miss at least four games. But everything will depend on the disciplinary article that is applied.

Аfter the whistle, while Messi was sad in the locker room, Villalibre played the trumpet:

Koeman had said before the game that winning a trophy would be a good step in Barcelona’s development as a team.

“It’s not a step backwards,”

he added after defeat to Athletic.

“A trophy goes to show that you’re on the right track. We’re going to show that we’re still. We did everything to win the game, both teams were very tired.”