ATK Mohun Bagan bounced back to winning ways in the 2022-23 Indian Super League season, as they secured a 2-1 victory over Goa on Wednesday. Dimitri Petratos and Hugo Boumous were on target for the Mariners, while for the Gaurs, Anwar Ali was the solitary goal-scorer.

ATK Mohun Bagan head coach Juan Ferrando made a couple of tweaks to the team that lost 0-1 against NorthEast United. Having recovered from his injury, Boumous returned to replace Lenny Rodrigues, while Pronay Halder was preferred ahead of Deepak Tangri.

The Mariners had the better start to the game and almost opened the scoring in the 6th minute when Boumous’ strike had a shot which did not miss the target by long. However, the first goal eventually arrived only three minutes later.

Liston Colaco showed his game intelligence by playing a quick throw for Petratos, but then, it was all about the Australian striker’s brilliance. Seeing the Gaurs’ custodian Dheeraj Singh Moirangthem off his line, he struck a shot which found the back of the net.

The hosts could have doubled their advantage in the 18th minute when Colaco played a diagonal ball for Asish Rai, who tried to find another teammate but was not successful in his attempt.

However, totally against the run of play, the Gaurs struck back in the 25th minute. From a set-piece routine, Edu Bedia delivered a delightful ball into the box which found Ali in a good position, and the young central defender did well to slot his attempt past the ATK Mohun Bagan goalkeeper, Vishal Kaith.

The next phase of the game was evenly contested, with both teams finding opportunities. At the half-hour mark, Tlang had a chance of whipping a cross into a dangerous zone but ended up crossing it into the stands. Four minutes later, Colaco dragged an effort wide from a free-kick. 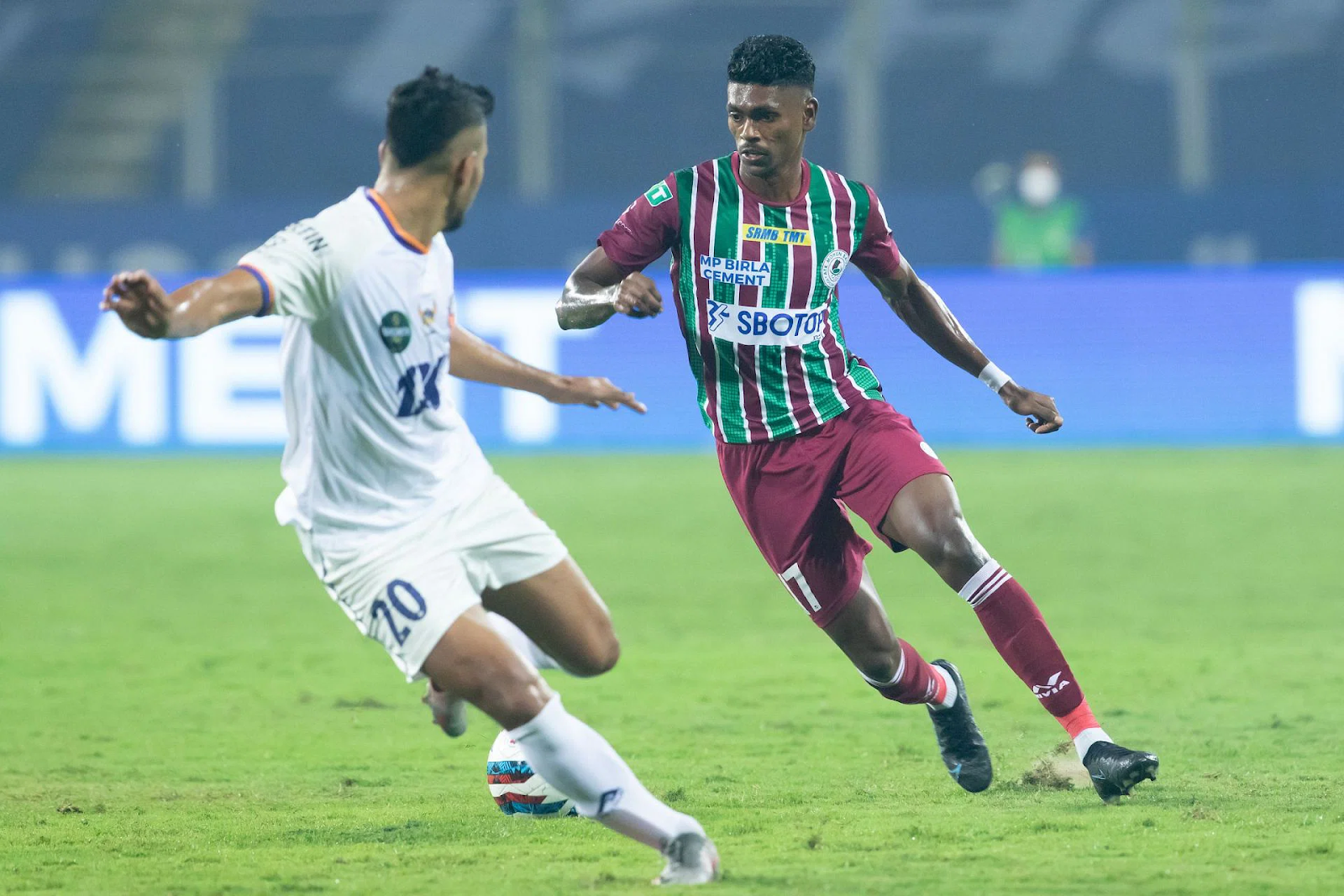 Just before half-time, Colaco had yet another good opportunity to add an assist to his name, as Petratos readied himself for what could have been his brace. However, the cross was a bit too long for the Aussie to chase.

Just like they did in the first period, ATK Mohun Bagan dictated the tempo from the first minute of the second half, and it eventually paid off in the 53rd minute. Miscommunication between Seriton Fernandes and Tlang saw Ashique Kuruniyan snatching the ball at the halfway line before releasing Petratos. The former Brisbane Roar striker could have gone for his second but showed his selfless nature by finding Boumous, who then had the simplest of tasks of rolling the ball into an empty net.

The goal helped the Mariners take complete control, and they should have had a third in the 69th minute. Petratos found himself in space yet again, this time with only Dheeraj to beat. However, his shot struck the side netting.

That missed chance could have come back to haunt Petratos, had it not been for a gilt-edged opportunity squandered by Ali. From another Bedia freekick in the 75th minute, Arnaout found himself in a good position but decided to lay it off for Ali. Having scored earlier, the defender was not as composed this time around as he could only hit the bar with his strike.

The best chance of the match came in the 85th minute to the Mariners. In a situation similar to how they scored the second goal, ATK Mohun Bagan’s attackers darted towards the Gaurs’ goal. Petratos played another selfless pass instead of going for goal, for Kuruniyan this time around, but the latter could not do what Boumous did earlier as he ended up dragging his shot wide. It also proved to be the last chance of the match.

With this victory, ATK Mohun Bagan climbed to the third position, with 23 points from 12 matches. They will now enjoy a two-week break before taking on Mumbai City on 14th January, while Goa, who remain fifth with 18 points, will face Hyderabad next Thursday.

Goa ends winless streak with a stunning 3-1 triumph over