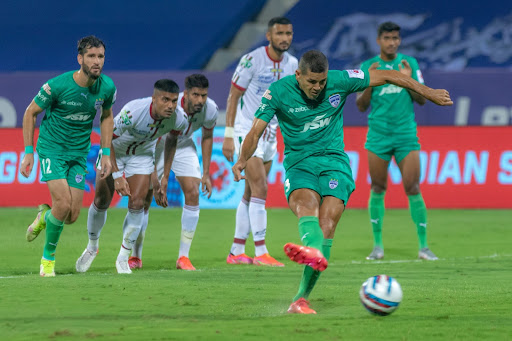 ATK Mohun Bagan and Bengaluru canceled each other out with some sublime strikes to play a 3-3 draw at the GMC Athletic Stadium in Bambolim in the 2021-22 Indian Super League season.

Bengaluru coach Marco Pezzaiuoli made three changes to the starting line-up that lost 1-2 to Goa including relegating Indian national team skipper Sunil Chhetri to the bench. Pratik Chaudhari also dropped to the bench while Indian international midfielder Suresh Wangjam was missing from the matchday squad as he picked up a red card in the previous fixture.

Ashique Kuruniyan was promoted to the left-wing position while Ajith Kumar and Parag Shrivas made inroads into the starting line-up deployed in the back-four. Prince Ibara also made a return to the playing XI shaking off his injury concerns to slot in the frontline.

ATK Mohun Bagan head coach Antonio Lopez Habas made no changes to his starting line-up despite being winless in the last three matches.

The Mariners started the match on the front foot despite their indifferent form as Roy Krishna poked the ball into the back of the net in the 8th minute but was adjudged offside by the linesman. Pezzaiouli’s ploy to play Ashique in an advanced position nearly reaped dividends a minute later when his cross found an unmarked Cleiton Silva inside the box but the Brazilian angled his header wide.

The Mariners broke the deadlock in the 13th minute via Subhasish Bose after the Indian international defender squeezed between three Bengaluru players at the near post to nod home Hugo Boumous’ corner-kick.

However, the former AFC Cup finalists found themselves back in the game in the 18th minute when Liston Colaco clipped Cleiton’s legs inside the penalty box. The referee rightly pointed towards the spot and the Brazilian striker calmly slotted the ball into the back of the net.

In the 26th minute, Bengaluru found themselves taking the lead for the first time in the match after Danish Farooq towered above his marker to connect with Cleiton’s cross from the corner-kick. The ball hit the underside of the woodwork before trickling past the goal-line as Farooq scored his first-ever ISL goal. 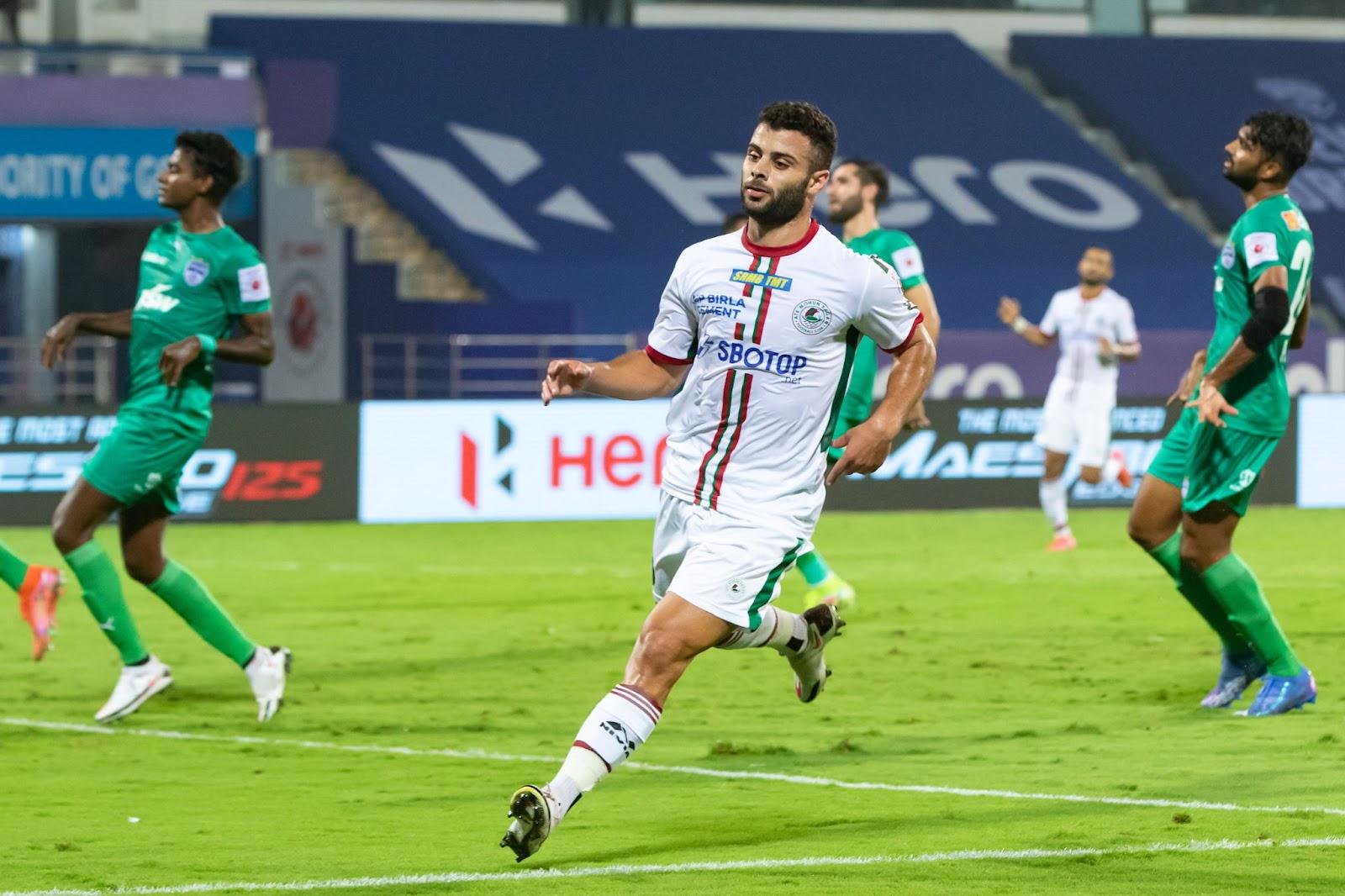 Hugo Boumous scored the second goal for the Mariners

ATK Mohun Bagan restored parity in the 38th minute when Krishna made a darting run through the middle before releasing Boumous inside the box. The French-Moroccan beat the rival goalkeeper Gurpreet Singh Sandhu to ensure the scoreline read 2-2 at half-time.

After a couple of goalmouth actions in the second half, the Kolkata-based side won a penalty of their own as Ibara brought down Bose inside the box. Krishna stepped up and sent the goalkeeper the wrong way to give Habas’ side the lead in the 58th minute.

Bengaluru got a golden opportunity to level things up in the 63rd minute when Alan Costa rose up to connect with Roshan Naorem’s corner kick but ultimately it went off target. But, Pezzaiuoli’s boys didn’t have to wait long as the equalizer came in the 72nd minute when Ibara nodded home Roshan’s corner-kick from close range.

Bengaluru had a big chance to win the contest in the dying embers of the game when Costa found the ball on his head from another corner kick but Bose made a timely clearance to rescue the Mariners.

Pezzaiouli will be satisfied to see his team get some points after failing to pick any in their previous three encounters. The same can’t be said about Habas as the Mariners have picked up only two points from their last four matches with their previous win coming against arch-rivals East Bengal in the Kolkata Derby.

Bengaluru will like to take the positives from this game into their next encounter against Jamshedpur on Monday while ATK Mohun Bagan will lock horns with NorthEast United in the replay of last season’s semi-final on Tuesday in the ongoing league season.