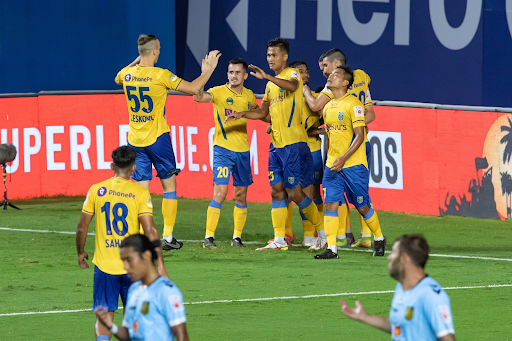 Kerala Blasters has extended to unbeaten streak to nine games

Kerala Blasters handed Hyderabad a 1-0 defeat in ‘Match 55’ of the 2021-22 Indian Super League season courtesy of a sublime volley from Alvaro Vazquez.

On the other hand, Hyderabad gaffer Manolo Marquez opted to field the same starting XI which secured a 2-2 draw against ATK Mohun Bagan four days ago.

Kerala Blasters could have scored as early as the fourth minute when Adrain Luna found himself through on goal with only the goalkeeper to beat, but instead of going for glory himself, he tried to thread a pass to the right and had his pass cut out by a Hyderabad player in the process.

The Nizams’ first big opportunity five minutes later, courtesy of a precise freekick from Edu Garcia. Kerala custodian Prabhsukhan Gill came up with a fingertip save to push Garcia’s effort to the crossbar, while a minute later, he was called into action again when a former Tusker in Bartholomew Ogbeche got his header on target.

The Nigerian striker got yet another golden opportunity minutes later when Akash Mishra’s cross from the right flank almost found himself through on goal but veteran Harmanjot Khabra did exceptionally well to meet the cross before Ogbeche could reach the ball.

The best chance of the first half fell to Kerala Blasters in the 24th minute when Luna delivered a perfectly weighted ball from the right flank for Jorge Pereyra Diaz. The Argentine striker placed his diving header on target but the Nizams custodian Laximant Kattimani produced a brilliant point-blank save to keep the scoreline at 0-0.

The Platense loanee soon found himself at the receiving end of another defense-spitting pass from Luna, but for the second time, Kerala paid the price for over-complicating things as Diaz tried to pick out a pass instead of pulling the trigger, which certainly would have been the better option.

Vukomanovic’s side finally reaped the rewards of their perseverance as a sensational Alvaro Vazquez strike handed them the lead in the 42nd minute. Khabra’s long throw spurred a pinball situation inside the box and the ball eventually found Vazquez whose venomous volley bulged the back of the net.

Hyderabad started the second half with renewed zeal and could have equalized in the 50th minute when Sahil Tavora delivered an accurate cross from the right flank, but neither Garcia nor Ogbeche could get their head on it. It was then Kerala’s turn to squander a chance minutes later when Vazquez failed to keep his freekick on target from a really dangerous position. 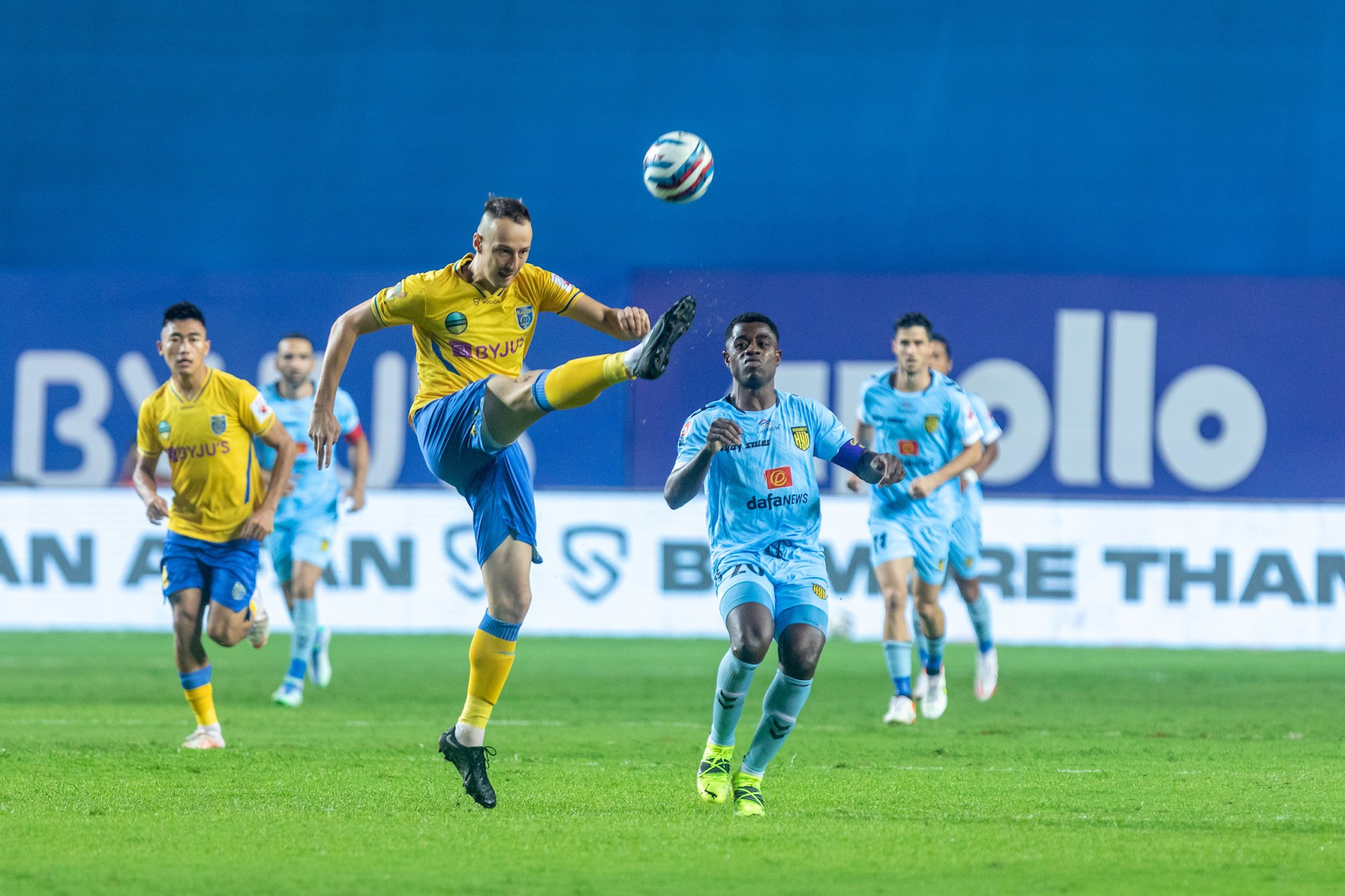 At the opposite end of the pitch, Marquez’s men got a freekick in the same position and this opportunity went in vain as well as Ogbeche’s strike took a big deflection before going out of play.

With nothing doing for his side, Marquez tried injecting fresh legs by bringing on Rohit Danu, Muhammad Yasir, and last match’s hero Javi Siverio. The last substitution almost paid dividends as Siverio tried to tuck in a poor Marko Leskovic clearance in the 80th minute but Jessel Carneiro’s goalline block ensured Kerala’s fourth win of the season.

The Tuskers have claimed pole position with this win for the first time since 2014 leaving Mumbai City behind on goal difference. They will now take on Odisha on Wednesday while the third-placed Hyderabad will square off against Chennaiyin on Thursday.