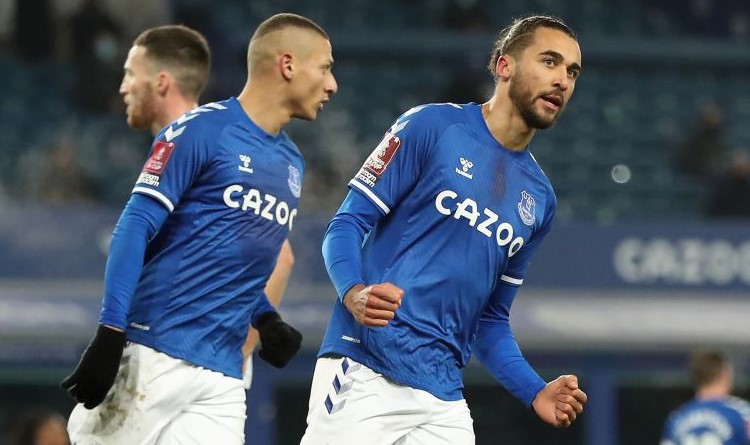 Heroes of the match, Richarlison and Dominic Calvert-Lewin

No one expected such a fight on a Wednesday night, but the teams surprised all the fans and gave a great show. Everton beat Tottenham (5-4) in extra time in the FA Cup 1/8.

Сarlo Ancelotti and Jose Mourinho’s teams, which are not the brightest in the league at this point of the season, played almost main squads and combined to score nine goals.

This was the highest-scoring FA Cup game between two top-flight teams since February 1961 when Sheffield Wednesday won 7-2 against Man Utd.

You can watch all the highlights of the match here:

The team from London opened the score early and that was just the beginning of the show.

After the opener, Everton answered immediately with three goals. First, Dominic Calvert-Lewin blasted a shot past Hugo Lloris from outside the penalty box after Sigurdsson’s cross. It was the second attempt – before that, the keeper made a splendid save. After a couple of minutes, Calvert-Lewin and Richarlison played the two-man combination – the Brazilian finished it neatly right into the corner of Tottenham’s goal. Five minutes later, Sigurdsson converted a penalty to make it 3-1. So were separated by only seven minutes and 26 seconds.

But before the break, Tottenham got back into the game after Lamela – Son – Lamela fast combination, Lamela converted nicely and Olsen was helpless.

Right after the whistle, Tottenham scored a third to equalize- again Sanchez after a corner, again he outplayed Sigurdsson in the struggle. Just then Calvert-Lewin was injured – and it seemed that it would be difficult for Everton to score without their attacking leader. But Richarlison was on – and he gave the team the lead, scoring almost as well as Lamela (Sigurdsson again made an assist). But Tottenham equalized again! Guess what – again from a corner, Harry Kane headed the ball after Son’s perfect cross.

The game went into overtime – and there the teams scored only one goal which was victorious for Everton. Sigurdsson had a great cross for Bernard, who found the ball and shot into the same spot as Lamela and Richarlison.

That was the reaction of Everton`s head coach, what a calmness:

Sigurdsson, who was instrumental in the Blues’ triumph, reacted:

“It was too open-ended, too many goals – it was probably good to watch. A fantastic Cup game and obviously fantastic to still be in the competition”

“It was great to come back. We conceded, I think, three goals probably from corners or set pieces, which is something we need to have a look at and work on, but the spirit in the team to come back and eventually go through is fantastic.”

5-4 is the final score, the teams had a crazy match, it seems that they scored for a couple of matches ahead. Good luck to Everton in the next stage of the FA Cup, Ancelotti urgently needs to change the situation with the corners, in this match almost all the goals were scored after the standards.

‘The special one’ shared his thoughts after the match:

Tottenham still have a little chance this season of winning their first trophy since 2008 – on April 25, Mourinho’s team will play Manchester City in the League Cup final.