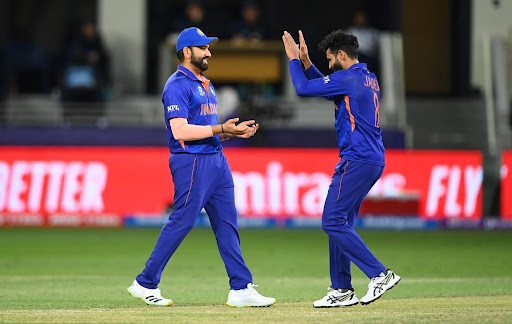 Rohit Sharma, Virat Kohli, and KL Rahul will return for the Bangladesh series, with the former back as skipper for both the ODI and Test legs

The Indian left-handed all-rounder Ravindra Jadeja, who missed the T20 World Cup due to a knee injury, has been added to both the ODI and Test squads for India’s tour of Bangladesh in December.

The Indian left-handed all-rounder Ravindra Jadeja, who missed the T20 World Cup due to a knee injury, has been added to both the ODI and Test squads for India’s tour of Bangladesh in December.

The selection panel named a lengthy squad of 17 for the Bangladesh ODIs thinking that the New Zealand tour will end on November 30 and the Bangladesh series begins on December 4, which allows only a small window for travel and rest.

Rohit Sharma, Virat Kohli, and KL Rahul will return for the Bangladesh series, with the former back as skipper for both the ODI and Test legs. The left-arm pacer Yash Dayal, who is part of the ODI squad, has earned his maiden India call-up.

Hanuma Vihari is a significant exclusion from the Test squad for the Bangladesh tour but the chairman of selectors Chetan Sharma credited a packed middle order as the reason for his exclusion.

“It’s not like there’s something wrong with this player but according to the combination, conditions, and wickets in Bangladesh…the selectors spoke about it, this is your formation and you have to see who are the players who feature in the eleven. So that is the reason Hanuma missed out. He was there in the side and he’ll come back very soon.”

However, Jasprit Bumrah proceeds with his recovery from a back injury and has not been ready for the tour.

“I always speak about managing the players. Workload management is something we follow very closely. We tried to hurry up with Jasprit Bumrah when the World Cup was approaching and look at what happened, we are without Jasprit Bumrah in the World Cup. The NCA team and the medical team are looking after him very well and he will be part and parcel of the team very soon, definitely against Australia. But against Bangladesh we were a little cautious with Jasprit Bumrah, we tried to not repeat what we did earlier.

“There is a reason behind resting players; the selectors don’t enjoy changing teams and captains. But considering the volume of cricket and the load management of players, we have to keep looking after their bodies. At the end of the day, they are human. But he [Bumrah] will be back soon, good teams are working with him and I’m hopeful that he’ll start playing for India soon.”

Cheteshwar Pujara has been retained on the Test side but Ajinkya Rahane continues to miss out. Justifying the exclusion of Rahane, Sharma said:

“The doors are always open for those who perform. Cheteshwar Pujara performed and he is there (in the team). Ajinkya Rahane is trying hard, and also scored some runs, but to return to the team he has to score more runs. And he knows that he’s in constant touch with the selection committee.

“The Ranji Trophy is coming up and Vijay Hazare is also there. Let’s hope that he performs well, the doors are always open for those who perform. If you look at the middle order and how packed it is, even Hanuma Vihari doesn’t have a place. So to break into this, the kind of performance that is required, the selectors don’t have to tell Ajinkya about it. He understands that. He is a great player, played 90-odd Test matches and he knows how to get into the team,”

Despite scorching Finch, Bancroft’s career-best secures the Scorchers a