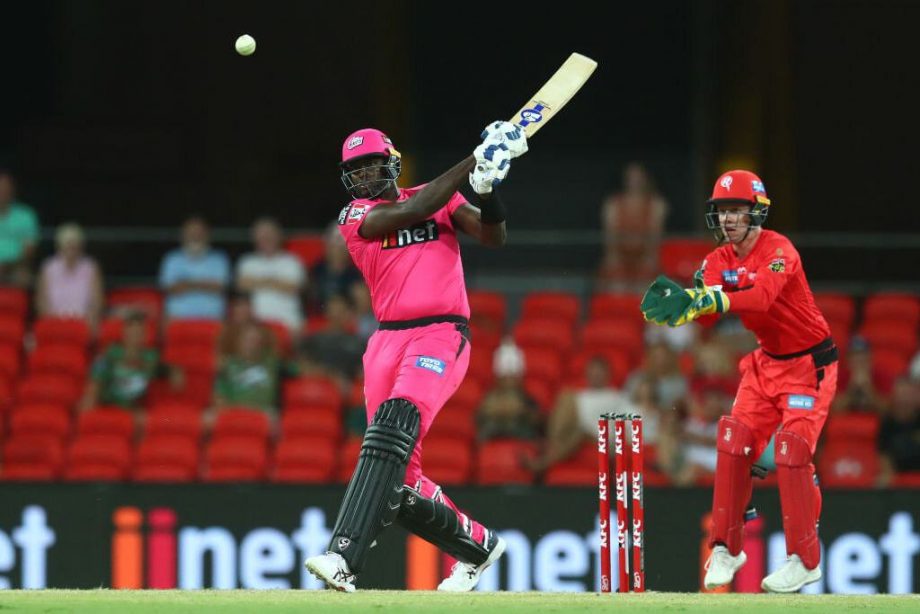 Sydney Sixers beat Melbourne Renegades at Metricon Stadium on Monday in a nail-biting match, a thrilling end with a ball to spare. The West Indian giant, Jason Holder completed the task in the final over when required 16 off 6 balls, clubbed four sixes to seal an amazing victory for Sixers.

It looked as Renegades were going good enough with the skilful bowling of Kane Richardson and an amazing bowling spell from Imad Wasim could do the job but then came Jason Holder who turned the match towards Sixers with a monster six finished the match from the penultimate ball.

The game was reached at the point where both the teams were at strong positions, gaining equal points with Shaun Marsh and Aaron Finch adding a blistering 75 runs for the first wicket. Josh Philippe, on the other hand, gave a flying start towards the chase. Imad Wasim and Muhammad Nabi bowled brilliantly and took 4 for 31 but Sutherland’s night ended with a forgettable 1 for 57.

Jason Holder stayed for three matches with Sydney Sixers and this was his conclusion that he saved the best of him. The match came to the final moments when Holder was to face the final over with 16 runs remaining. He missed the first ball as Sutherland bowled an unusual Yorker of the evening but the next two deliveries went in favour of Sixers as Holder took a double-run on the second ball.

Renegades moved the fielding from mid-off inside the circle and it proved costly although it would have not mattered as Holder picked-up the gaps wisely and sent the ball into stands for two fours. The fifth ball change confirmed the victory of Sixers and Jason Holder stood tall and lofted the ball towards the long-off region over the rope. The biggie from Holder concluded the match in the fate of the Sixers.

Kane Richardson had an amazing night for Renegades with his 2 for 21 in four overs, close to a match-winning struggle. His opening over to Philippe put him in real trouble, a big lbw shout on the first ball declined then a wide edge towards the slip region would have been caught. The last ball was carved into off-side and Imad Wasim dropped a tough one over his shoulder while running back.

Philippe was on 4 and he stopped on 48 after hitting five consecutive boundaries to Sutherland. Richardson’s second over cost him two boundaries while his third over conceded two runs with four dot balls against Jason Holder. His final over went for only five runs including the wickets of Carlos Brathwaite and Ben Dwarshuis but it was not enough for Renegades.

It was not proved futile as Shaun Marsh scored a top gear 67 off 48 balls to become the backbone of Renegades’s innings. At the tenth over, he was 31 off 28 balls but then his majority of 14 runs came in the over of Steve O’Keefe’s 11th over. He completed his half-century in 38 balls and it was the finest shot of the innings, although not a six but a forehand smash of the slower short ball as Marsh could play that shot three times.

Right after that, he became the third BBL batsman to reach the milestone of 2000 runs following Aaron Finch and Chris Lynn from Brisbane Heat. After Braithwaite took his wicket in the 15th over, Renegades were restricted to 46 runs in the last five overs and 18 of which came in the penultimate over.