The Australian cricketer D’Arcy Short smashes the leggier, Rashid Khan in a blistering knock in BBL 2020 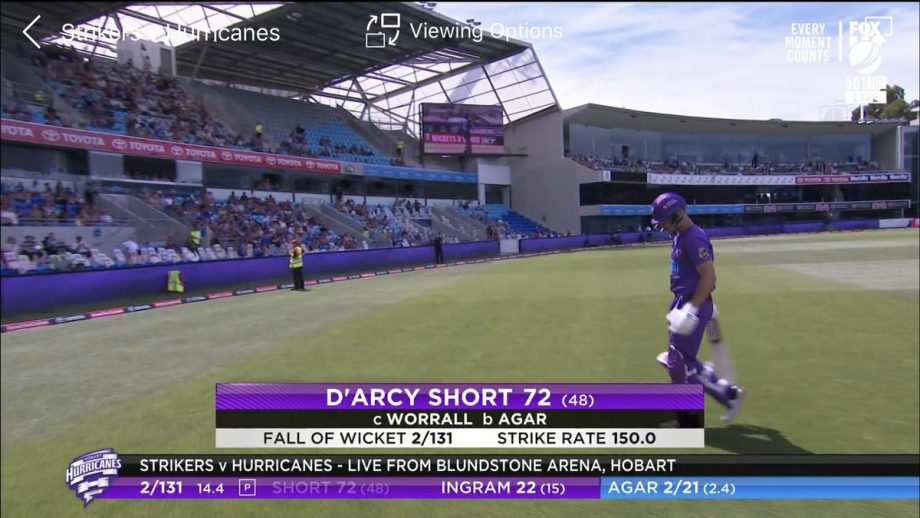 D’Arcy Short stars from Hobart Hurricanes with 3 sixes in 14th over to Adelaide Striker’s, Rashid Khan. The Hurricanes won a thriller at Blundstone Arena by 11 runs.

D’Arcy Short struck against Adelaide Strikers with a blistering knock of 72 (48) to register their second win in the ongoing BBL 2020 league 2020-21.  The Hurricanes defeated Strikers by 11 runs at Bellerive Oval.

AS won the toss and opted to field first. The opposition was taken aggressively by Hurricane’s opener, D’Arcy Short smacked all over the ground including four sixes and six fours to post a decent 175 runs target against Strikers. Short was in great form as he performed a one-man show to entertain the crowd. The timing was excellent and so was the execution. He did not spare the Afghan leggie, Rashid Khan and smashed him 3 sixes in the 14th over.

The number one ICC ranked T20 bowler was torn with the bat of D’Arcy Short after he conceded 25 runs in a single over. The summary of that over was 6,6,4,6 and 2. Will Jacks 34 (25) also contributed along D’Arcy short to make his side’s total 175 in 20 overs. D’Arcy short was dismissed by Wes Agar in the 15th over, caught by Daniel Worrall.

On the bowling side, James Faulker bowled a fine spell with three wickets at the cost of 21 runs in four overs as a result, Daniel Worrall’s unbeaten 62 runs went in vain for Adelaide Strikers.

The leading runs scorer from Hurricanes were D’Arcy Short 72 (48), Will Jacks 34 (25) and 25 (19). On the bowling side, Wes Agar picked up two wickets while Peter Siddle and Daniel Worrall took a single wicket each.

Hobart Hurricanes are second on the points table while Adelaide Strikers are fifth on the table after playing just a single game. Both the teams will face each other in their next match on December 15th at the University of Tasmania Stadium.