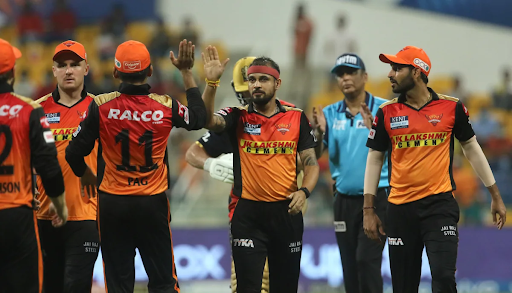 Even though Sunrisers Hyderabad were able to record their third victory in the tournament, their win will have absolutely no impact on the points table as they remained at the bottom of the pool with 6 points in 13 matches having lost 10 and won only 3. On the other hand, Royal Challengers Bangalore remained at the third position with 16 points in 13 matches coming from eight wins and five defeats. Royal Challengers Bangalore have already qualified for the IPL 2021 play-off round.

Sunrisers Hyderabad but at first and got to an ordinary total of 141/7 in their 20 overs. SRH opening batsman from England, Jason Roy, scored 44 from 38 balls with five boundaries whereas the team captain and Kiwi batsman Kane Williamson made 31 from 29 balls with the help of four hits to the fence.

There were other contributors for SRH in Abhishek Sharma, who made 13 at the opening slot, Priyam Garg made 15, Wriddhiman Saha made 10 batting at number six and Jason Holder contributed with 16. For the Royal Challengers Bangalore, Harshal Patel was once again the pick among the bowlers as he returned with figures of 4-0-33–3. Daniel Christian was also impressive with the ball as he produced a fine spell of 3-0-14-2 whereas George Garton and Yuzvendra Chahal both took one wicket each.

Royal Challengers Bangalore faltered in their chase with Virat Kohli being dismissed for 5 and Daniel Christian for 1 at the top which implied a lot of pressure on the middle order. Devdutt Padikkal was forced to curb his attacking instincts as he made a workman-like 52-ball 41 with only four boundaries. RCB wicket-keeper batsman Srikar Bharat made 12 and AB de Villiers remained unbeaten on 19.

Glenn Maxwell, who has scored the most runs for Royal Challengers Bangalore in IPL 2021, made 40 from 25 balls with two sixes and three boundaries but somehow his team finished short of the target with Sunrisers Hyderabad winning the contest by four runs.