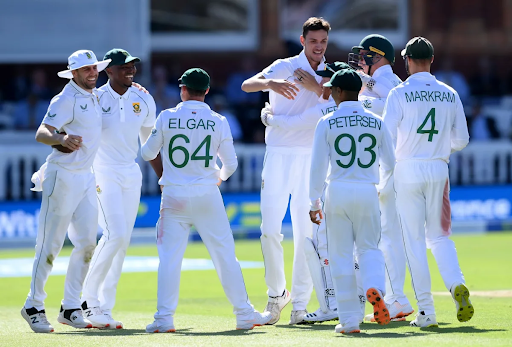 South Africa were clinical in the first Test against England

South Africa produced a clinical performance in the first Test at Lord’s against England to hand the home side their first defeat in the Brendon McCullum era, recording a big victory at the home of cricket by an innings and 12 runs to take 1-0 lead in the three-match series.

The South African bowlers, who were so remarkably led by pace spearhead and ace fast bowler Kagiso Rabada – match haul of 7 wickets — outclassed not only their English counterparts but showed England that their new strategy of baseball will not work against quality fast bowling which they possess.

Bazball — the much-talked about theory of English batsmen going hard against bowlers even in Test cricket — was debunked to such an extent that England were shot out for paltry totals of 165 and 149 in the two innings, failing to make South Africa bat again in the match.

Evidently, the South African bowlers had done their homework and did not give the English batsmen any chance to free up their arms or even come back in the contest after they had made early inroads. In the first innings, Kagiso Rabada led the South African bowling attack with a splendid spell of 19-3-52-5 while Anrich Nortje took 3/63 and Marco Jansen took 2/30 to bowl England out for just 165 in 45 overs.

Having taken an early advantage in the match, South Africa needed to bat big once to shut England out of the contest and it evidently did so, even though they could muster up 326 — an at-par score in the current scenario.

Sarel Erwee scored 73 from 146 balls at the top for South Africa to provide his side with a strong start in the company of Dean Elgar, who made 47. Keegan Petersen scored 24 but the other batsmen such as Aiden Markram (16), Rassie van der Dussen (19) and Kyle Verrynne (11) disappointed.

The young Marco Jansen chipped in with vital 48 which came from 79 balls and four boundaries and a 6 to push South Africa total beyond the 300-run mark in the company of Keshav Maharaj, who scored an extremely important knock of 41 from 49 balls, hitting seven boundaries in the process.

Keshav Maharaj had a bigger role to play with the ball in the second essay as he struck early twice in the English innings to put them back and Anrich Nortje took over to dismantle the rest of the home side batting.

Alex Lees scored 35, Jack Rowley made 30, Ollie Pope, who scored a fine 73 in the first innings, was dismissed for five whereas batting mainstay Joe Root was dismissed for 6 as England’s fight petered out against a spirited South African bowling attack.

Stuart Broad scored 35 runs, out scoring his captain Ben Stokes (20) and Jonny Bairstow (18) in the process but could not get enough towards the end to make South Africa bat again.

The second Test will be played from August 15 at Old Trafford, Manchester.