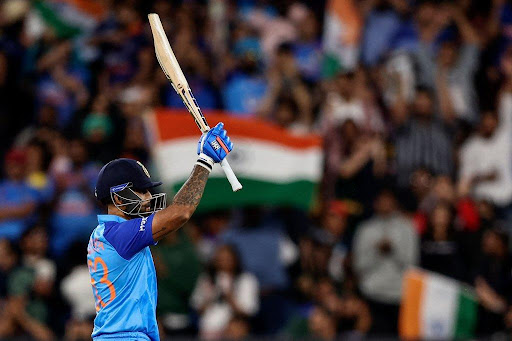 Sanjay Bangar says with the number of options SKY has, he plays all types of shots

Suryakumar is one of the highest run-scorer in the competition, with three half-centuries to his name while former India all-rounder Sanjay Bangar praises Suryakumar for being a fearless batter who can play well even in the difficult conditions of Australia and England.

Team India suffered a 10-wicket defeat against England in the semi-final of the T20 World Cup 2022. With many factors to work on, the Rohit Sharma-drove side will have one thing to value and that will be the power-pressed execution by their star hitter Suryakumar Yadav.

The right-handed player has left a long-lasting impression with an astounding total of 239 runs in six matches. Suryakumar is one of the highest run-scorer in the competition, with three half-centuries to his name.

The 32-year-old batter has earned a lot of praise from fans and cricket experts for his exceptional performance. Former India all-rounder Sanjay Bangar also lavished praise on Suryakumar for being a fearless batter who can play well even in the difficult conditions of Australia and England.

“He has become an all-round batter. There was a time when Suryakumar Yadav was known for playing only shots over fine leg. Now his range has increased, and his stature has increased. The special thing is that in pressure situations, whether it is Australian or English conditions, which are considered the most difficult for batting, he has gone there and on his first tour itself, he has left his impact,”

“Suryakumar Yadav is a player who will revolutionize Indian T20 cricket. You will have to find more multi-dimensional players like him, just like the England team, which is filled with all-rounders till No. 9 or No. 10. Players, who can target both sides of the wicket with their shots, can play the switch hit, reverse sweep, and find unconventional pockets. I feel such players will get more encouragement. With the number of options he has, he plays all types of shots. He is an inspiration, and you will get to see more players who play like that going ahead,”

Earlier, England skipper Jos Buttler had stated that Suryakumar should win the “Player of the Tournament” award for the T20 World Cup 2022.

ICC had quoted Buttler as saying.

ICC on Friday revealed a list of nine players that are in contention for getting the prize, featuring star Indian batter Virat Kohli, who has been the tournament’s leading run scorer with 296 runs to his name, courtesy of four fifties.