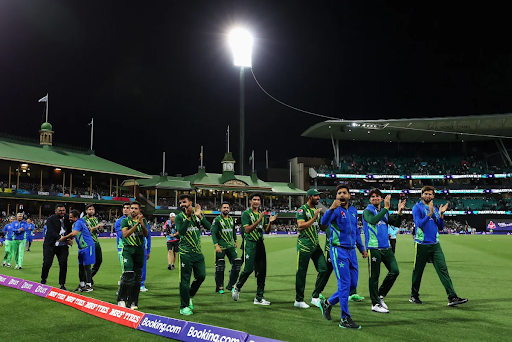 For a team which had all odds start from the against them about a week ago, Pakistan were able to turn around their fortunes remarkably and become the first team to reach the final of the ICC T20 World Cup 2022 on Wednesday when they thrashed the tournament favourites New Zealand by 7 wickets and 5 balls to spare at the Sydney Cricket Ground (SCG) in the first semi-final.

Not long ago, a narrow 1-run defeat at the hands of minnows of Zimbabwe had virtually shut the doors of qualification for the semi-final on Pakistan, since they had also lost to India in a tense finish in their first match at Melbourne on October 23.

Pakistan found it tough beating the likes of the Netherlands and Bangladesh but they were thoroughly clinical in their massive victory by 33 runs via Duckworth Lewis method against South Africa in Sydney.

The defeat in the first two matches had put Pakistan on the route of exit in the first round itself, but they also needed favours from other teams in order to make the final four. And as things turned out, the Netherlands recorded a once-in-a-generation and sensational 13-run victory over South Africa, which propelled Pakistan ahead of South Africa, and their contest in Adelaide against Bangladesh became a virtual quarter-final.

India and England will meet on Thursday in the second semi-final at the Adelaide Oval while the final of the tournament will be played at the Melbourne Cricket Ground (MCG) on Sunday, November 13.

Pakistan were absolutely sensational in the first semi-final at the SCG as they first produced a stunning performance with the ball, not allowing New Zealand to get away at any stage after the Kiwi captain Kane Williamson won the toss and elected to bat, restricting them to an at-par total of 152/4.

In their chase, Pakistan, for the first time in the tournament, had their opening pair of Babar Azam and Mohammad Rizwan putting on a century stand of the two right-handed batsmen knocked off 105 runs from their 153-run target inside 13 overs to put Pakistan in the pole position to win the match.

Both Babar Azam and Mohammed Rizwan scored their first half-centuries of the tournament. The wicketkeeper-batsman Mohammad Rizwan struck 5 boundaries to make 57 from 43 balls while the Pakistan captain Babar Azam made 53 from 42 balls with the help of 7 boundaries, before both were dismissed by left-arm New Zealand fast bowler Trent Boult.

The story, however, might have been a lot different had Devon Conway taken a tough catch of Babar Azam in the first over off Trent Boult, perhaps then things would have moved in an entirely different way for Pakistan.

But there was no looking back from the reprieve as the Pakistani star opening pair punished the New Zealand side for being tentative, unconvincing and simply meek on the big night of the semi-final as the Kiwis once again occupied their traditional semi-final spot – like they have done in so many ICC tournaments.

It was indeed a sorry match for New Zealand who just did not show up at any stage of the game to challenge Pakistan’s progress. After Shaheen Shah Afridi removed Finn Allen in the first over, Devon Conway (21) and Kane Williamson (46) got together to add 34 runs for the second wicket but New Zealand could never get in a position to dominate the Pakistani bowlers.

Daniel Mitchell played a vital knock of 53 not out from 35 balls with 3 boundaries and a six to power New Zealand to a total that would have been deemed defendable at the halfway stage, but New Zealand shockingly suffered a steep fall under standards they have shown.

Still not fully fit, Shaheen Shah Afridi yet produced a fine spell of 4-0-24-2 when Mohammad Nawaz took 1/12 from his 2 overs but more importantly, Pakistani bowlers largely remained in control of proceedings in the first half of the match.

At the same time, New Zealand bowlers lost their lines very quickly against the Pakistani opening pair of Mohammed Rizwan and Babar Azam, giving them enough room to free their arms and get boundaries in large numbers. For a team which does not traditionally make full news of the powerplay, Pakistan were off to a flyer, adding 55 runs inside for 6 overs to put a strong stamp of their authority on the contest.

There was indeed a late surge of wickets for New Zealand but not before the match was lost and the Kiwis were once again confined to looking back into what went wrong and why they almost every time fail at the semi-final stage.