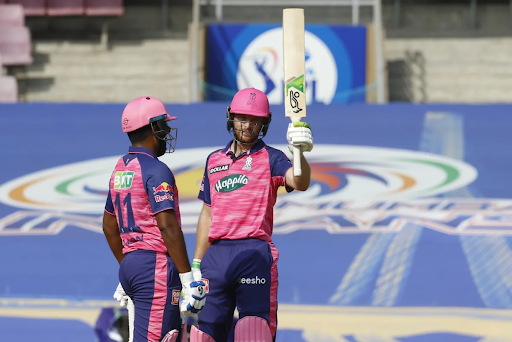 Jos Buttler scored his maiden century of the season on Saturday

Jos Buttler scored a magnificent 100 against Mumbai Indians as Rajasthan Royals recorded a 23-run defeat in the Match No 9 of the ongoing Indian Premier League (IPL) 2022 tournament on Saturday afternoon.

In the contest played at the DY Patil Stadium in Mumbai, Rajasthan Royals flexed their batting muscle by power themselves o a huge total of 193/8 in their 20 overs, and in their return restricted Mumbai Indians to only 170/8 despite half-centuries from them young batsmen Ishan Kishan and Tilak Varma.

Buttler made 100 from 68 balls with the help of 11 boundaries and 5 sixes whereas Sanju Samson contributed with a 21-ball 30 and Shimron Hetmyer scored rapid 35 from 14 balls as Rajasthan Royals finished at a strong total of 193/8 after Mumbai Indians won the toss and invited them to bat first.

For the four-time title winners Mumbai Indians, their pace spearhead Jasprit Bumrah recorded a superb spell of 4-0-17-3 whereas the better than English fast bowler Tymal Mills returned with 4-0-35-3.

In their reply, Mumbai Indians lost their captain Rohit Sharma early for 10, who was dismissed by India fast bowler Navdeep Saini. Ishan Kishan did well to score his second consecutive half-century of the tournament, making 54 from only 43 balls with 5 boundaries and a six but his effort went in vain and so did the contribution from Tilak Varma.

The 19-year-old Hyderabad batsman Tilak Varma top scored for Mumbai Indians with 61, which came from only 33 balls including 5 sixes and 3 boundaries. The senior Mumbai Indians all-rounder Kieron Pollard contributed with a 24-ball 22, which included 3 boundaries and a six but the former champion just did not have enough within them to get past the total set by Rajasthan Royals.

For the victorious Rajasthan Royals team, legspinner Yuzvendra Chahal took 2/26 from his four overs well as Navdeep Saini took 2/36 from his three overs. The other wicket takers for Rajasthan were Trent Boult, Prasidh Krishna and spin bowler Ravichandran Ashwin.

Mumbai Indians will next take on Kolkata Knight Riders (KKR) on Wednesday in the Match No 14 of the tournament whereas Rajasthan will look to continue with their dominant performance against Royal Challengers Bangalore on Tuesday, April 5.