Perth Scorchers finally did it! Won their first-ever match of season 10 against Adelaide Strikers at Adelaide Oval 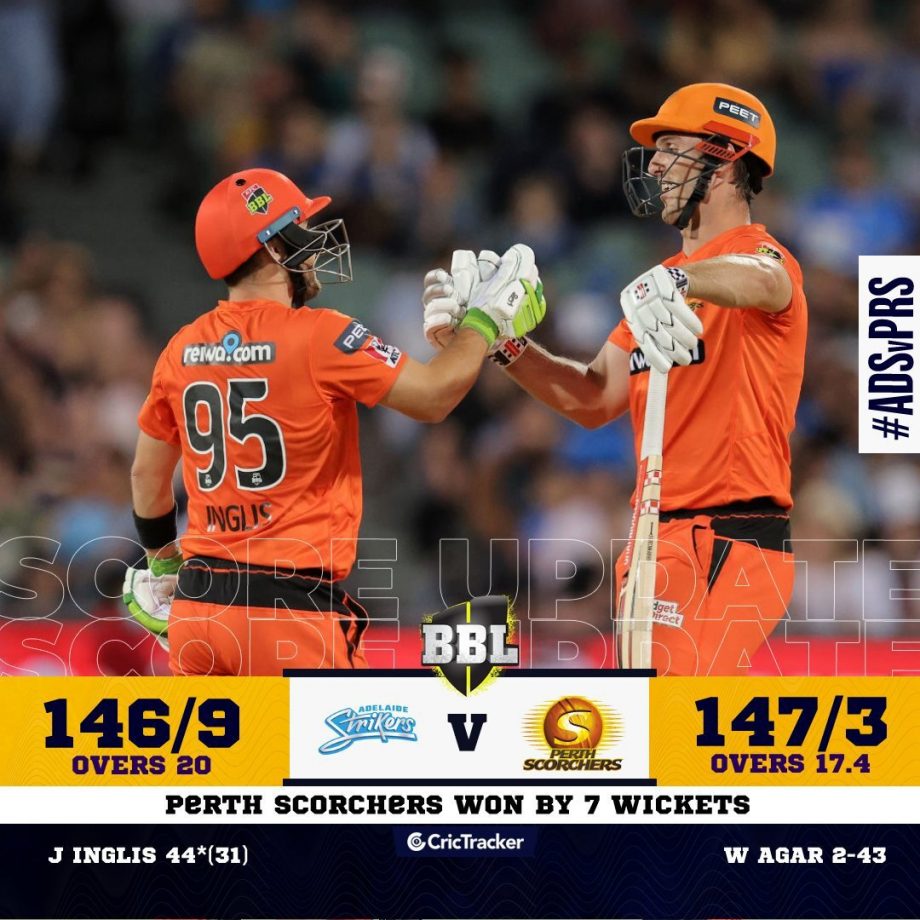 Perth Scorchers finally crossed the line and gave their fans a New Year celebration after winning the first-ever game of season 10 against Adelaide Strikers on Thursday at Adelaide Oval, Jhye Richardson was named as player of the match.

After an awful start for the season, Scorchers have lost three of their first four matches- the other one washed-out against Stars- Scorchers have put a great show in all three departments of the bat, ball and the field to mark their first-ever win for the summer against Strikers to spoil their New Year celebration with 14 balls to spare.

Scorchers chased the target of 147 with 14 balls to spare with such confidence as if they never lost a match, Jason Roy opened the innings with great thrill although he was unlucky to get out 49 he set the right pace for the team. Earlier, Scorcher won the toss and opted to field first.

Jason Roy produced some solid shots with his bat following seven fours and a six not even sparing the Afghan leg spinner, Rashid Khan, smashing two reverse sweeps to make a statement to the recently announced T20I player of the decade.

After scoring blistering innings of 49, unluckily he was caught at short cover off on the bowling of Wes Agar as Scorchers reached 57-0 in the eight over. After a few overs, Liam Livingstone got dismissed after Alex Carey took a brilliant catch behind the wicket to put some twist in the game.

Josh Inglis (44*) and Mitch Marsh (38*) sensibly picked up the innings from there to reduce the run-rate under six with running between the wickets and boundaries on the loose deliveries. With their fine partnership, Scorchers reached 76 at the end of 10th over and after that, they put an unbeaten 67 runs stand to win the match with 14 balls to spare and 7 wickets in hand.

Perth Scorchers confirmed the win even after the outstanding from Strikers captain, Alex Carey who denied to give the match in the hands of Scorchers. He was the only batsman from Strikers who stood firm against the bowling attack of Scorchers who kept taking wickets at the times of need.

The left-hander produced a balanced knock of 82 runs off 59 balls including 12 fours and a six to reach 146-9 in 20 overs, second lowest for Strikers in BBL season 10.

The Scorchers picked up the nerves of Strikers early after dismissing in-form openers Phil Salt (4) and Jake Weatherald (6) in the first three overs of the game.

Alex Carey then steadied the ship for Strikers after hitting five useful boundaries in the first eight overs.

“He’s looking ominous here, Carey. The ball’s flying off his bat. He’s putting on a clinic. He’s got the right shot for every delivery,”

Carey partnered with Matt Renshaw for a third-wicket stand of 48 runs before the latter was caught at mid-on off tall Scorchers paceman Aaron Hardie, who took 2-7 off his first two overs.

Carey completed his half-century and tried to build a partnership with Jon Wells (2), Matt Short (6) and Rashid Khan (8) but they failed to put their part after early dismissals in three overs.

Jhye Richardson was named as player of the match, taking 3-19 as he bowled with aggression and pace.