Paras Mhambrey: Umesh Yadav is a very experienced bowler; we all know what he brings to the table 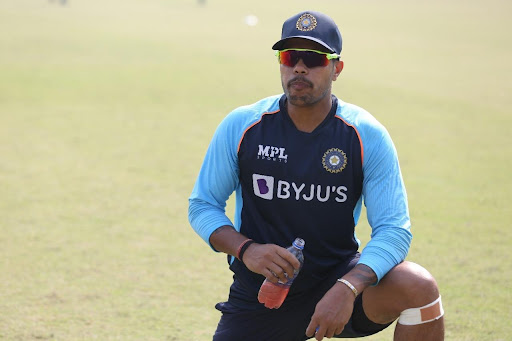 Paras Mhambrey says Shami and Bumrah will be missed, but we also see this as an opportunity that the others have to play Test cricket and perform for the team

India’s bowling coach Paras Mhambrey has expressed that the upcoming two-match Test series against Bangladesh will be a great opportunity for the Indian pacers to make themselves count in the absence of Jasprit Bumrah and Mohammed Shami.

India’s bowling coach Paras Mhambrey has expressed that the upcoming two-match Test series against Bangladesh will be a great opportunity for the Indian pacers to make themselves count in the absence of Jasprit Bumrah and Mohammed Shami. He further added that Umesh Yadav will initiate the attack.

Umesh, who has been available with the Indian side for most parts of the last 10 years, has played in only 11 Tests in the last four years. Mhambrey said,

“Umesh is a very experienced bowler, we all know what he brings to the table. With how things have been, unfortunately, he hasn’t got too many opportunities to look at the team balance.

“You have someone like Bumrah, Shami, and Mohammad Siraj coming in as well. He didn’t get too many opportunities, unfortunately. The team management has spoken to him about why we have taken certain decisions, we have been very clear, and we have clarity over what Umesh is concerned.”

He further went on to add,

“If I look at it the other way, Umesh Yadav becomes a spearhead for us now. He has a lot of experience with him going into the Test match. I’m also happy with the way Siraj has delivered in Test cricket. The Test matches he has played for us in England and other venues, he has performed for us and won Test matches for us.

Considering that the pitch at the Zahur Ahmed Chowdhury Stadium in Chittagong has traditionally preferred batters, a lot of pressure will be on the bowlers to find wicket-taking opportunities.

Something even Taskin Ahmed mentioned in the press conference on Monday. However, Mhambrey would rather not stress a lot over the plans of the opposition.

“They know their conditions very well,”

“As a home side, they have the advantage, they know the conditions, and they play out here a lot more than we have. But when you go out to play a Test match on a fresh day, it doesn’t matter what side we’re playing. Our perspective is clear, on how we’re going to implement our strategies going ahead in the series, and the Test match. We want to focus on ourselves, play good cricket, and look forward to this challenge.

“We’ll look at the surface. We saw the wicket yesterday. We played one game here, it was a flat wicket. From a bowling perspective, we know we have to work very hard to take 20 wickets. Depending on the surface, we will see whether to go with three seamers or three spinners. The trend here over the last 2-3 years has seen high-scoring games.”

Even as the team will return to the longest format after an extended break, Mhambrey isn’t too worried about tuning to the five-day format.

“We are playing Test cricket after a long time. It takes a while just to have the mental change as well. Discussions are going on. We’ve spoken about it nicely. It has happened with a lot of teams who have come from playing in the T20 World Cup.