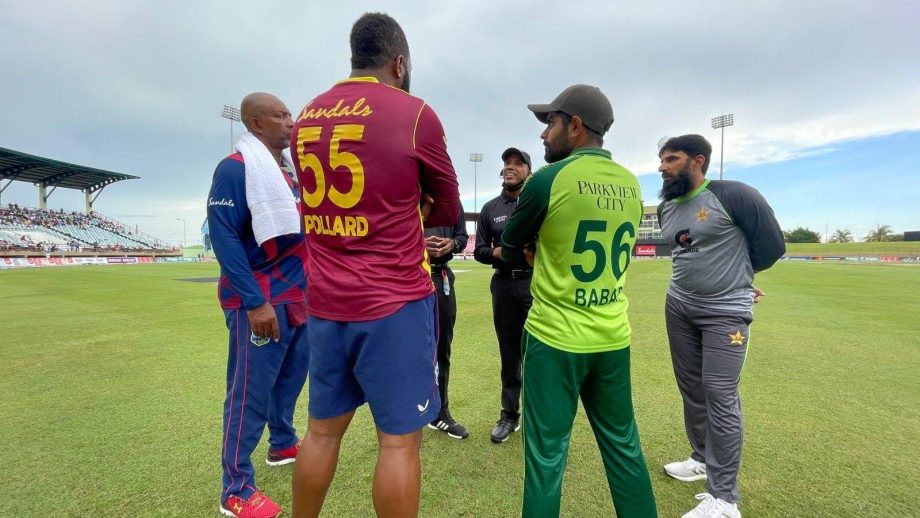 Due to persistent rain and a non-recoverable wet outfield, the third T20I between Pakistan and West Indies washed out at Guyana on Sunday after 1.2 overs bowled by Pakistan.

Before the start of the series, the fans received unwanted news in the form of a reduction in one out of five T20I series between Pakistan and West Indies due to changes in the recent West Indies and Australia, ODI series.

The series did not have a great start as the first T20 got continuous rain interruptions as it can complete only one side of the innings.

First, the match was reduced to 9 overs on each side and West Indies completed their innings on 88/5. But before Pakistan could bat second, there comes the rain again and it never started again and the match ended with no result.

The second T20I was played like a normal game when West Indies had won the toss and decided to field first. Pakistan started the innings very well. Pakistani openers, Sharjeel Khan and Mohammad Rizwan were in good touch.

In the third over of the innings, when Akeal Hosein came to bowl his second over and Rizwan hits him two consecutive sixes. His opening pair, Sharjeel was also in good touch and he puts a couple of boundaries but failed to go on with the job when Jason Holder takes his wicket.

Then Pakistan skipper, Babar Azam comes to bat and starts his innings fearless and continuously scores the boundaries.

On the other hand, Rizwan was also looking in a good form. He also hits several fine boundaries. Runs keep flowing for Pakistan.

Both Babar and Rizwan had made a great partnership but their partnership breaks down when Babar calls his partner for double, was undone when Evin Lewis directly hits the ball to the wicket and dismisses Rizwan on 46.

Babar was still on the pitch and his first fifty of the series comes off 38 balls when he hits the six to Romario Shepherd.

After Babar’s wicket, no one could stay on the pitch and Pakistan keeps losing the wickets.

West Indies didn’t start the innings very well. On the very first over of the innings, Mohammad Hafeez  took the wicket of Andre Fletcher and sent him to the pavilion at the zero runs.

Chris Gayle (Universe Boss) came out after the first wicket but he couldn’t play long. He didn’t help his team to take them out from this critical situation and he loses his wicket on Hassan Ali’s first over.

Then Shimron Hetmyer and Lewis kept struggling for runs as they were unable to score a boundary.

Wasim Jr came to deliver his second over and took the wicket of Hetmyer and their partnership breaks down.

At the end of the 14th over, Evin Lewis retired hurt because he had a cramp on the left side under the ribs.

West Indies wanted someone who provides them a big total and all hopes were now on Kieron Pollard and Nicholas Pooran and the latter hit a couple of boundaries now and then. However, he didn’t receive good support from the other end to help West Indies to win this match.

In the 19th over, Nicholas Pooran hits two boundaries in a row to Hasan Ali but couldn’t stand their team on the winning side.

In the end, West Indies needed 20 runs from 6 balls but Pakistan won by 7 runs.

“I was very impressed with the boys,”

“We were 10-15 runs short, but our bowlers bowled very well, and I think we should give them credit. We were looking for 170-180, but we lost too many wickets at that time.”

“I was very impressed with the boys,”

“We were 10-15 runs short, but our bowlers bowled very well, and I think we should give them credit. We were looking for 170-180, but we lost too many wickets at that time.”

“At the end of the day we could have taken a few more singles, but you can come up with lots of ideas, but this is a learning curve for us. There are things we continue to look at, and it’s all about improvement as the games go on. We were on the losing end today but all hope isn’t lost.”

The third T20I also gets sheer disappointment just like the opener of the series. The toss was delayed due to rain and it finally happened.

West Indies won the toss and elected to bat first. Andre Fletcher hit a couple of sixes but after WI 15/0, rain-interrupted again.

The groundsmen tried their best to recover the wet outfield and there was not even the possibility to play 5 overs on each side and it washed out.

The fourth T20I will be played at the same venue and there are chances of rain interruptions. Pakistan now leads the four-match T20I series by 1-0 with two games completely washed out.