Pakistan vs England: Preview and Prediction

England crushed India in the 2nd semi-final with  Alex Hales and Jos Buttler toying around with the Indian bowling attack. The England openers led the team to a 10-wicket win over the 2007 champions with 4 overs remaining.

While this was disappointing for the Indian fans, it must have come as a warning for Pakistan. England is coming to the ‘G with a deep batting lineup and a spirited bowling attack. There will be no room for errors for the Pakistan team. The top-order will have to be on their best day if they are to put England under pressure.

Rizwan and Babar at the top while Mohammad Haris and Shan Masood in the middle order need to step on the gas and hurt England’s bowling attack. Mark Wood missed the semi-final and Chris Jordan, who replaced him, made an impact with the ball, in spite of having played just one game since his recovery from a finger injury.

Pakistan’s key pacer Shaheen Shah Afridi, who went wicketless in the first two games, picked 10 wickets in the next four. The stage is all set for an exciting T20 World Cup Final at the MCG. Pakistan will be out to repeat their heroics of the ‘92 World Cup where they beat England to be crowned champions.

Pakistan will head into the game with the same line-up that has brought them a turn in their fortunes. Hence, expect Pakistan to line up with four batters, four all-rounders, and three bowlers in this game.

England, as much as they would have liked to bring back Dawid Malan into the playing XI, the player seems to be injured still. Thus, they would play Phil Salt in place of the left-handed batter as they did in the semi-finals while they would also like to stick with Chris Jordan in place of Mark Wood as the former brings batting abilities along with his death bowling traits.

Two back-to-back losses in their first two games almost had Pakistan on the flight back to Karachi. Even a single loss from their remaining four matches would have sent them home. Even winning all these games wouldn’t guarantee Pakistan a spot in the semi-finals. It took a special upset in Group 2 as the Netherlands beat South Africa to open up more possibilities.

Pakistan taking on Bangladesh became a virtual quarterfinal with both teams in the hunt for the semi-final berth. Shadab Khan’s inning against South Africa changed the game for Pakistan. It not only helped the team win that crucial encounter but also infused some much-needed belief in the middle order. The openers failed in the tournament from the start.

From the South Africa game onward, new match-winners started cropping up in the middle order. Shadab Khan, Mohammad Haris, Shan Masood, and Iftikhar Ahmed all stepped up and gave the fans and the skipper a lot of confidence. Not to forget the all-rounder Mohammad Nawaz.

And finally, the openers, Rizwan and Babar came to the party with a 105-runs opening stand in the semi-final against New Zealand. Mohammad Haris will be a key player to watch out for in the final. The bowlers will have a big task at hand. The opposition has an unbelievably deep batting lineup. And getting through that won’t be easy. Pakistan needs to make a few replacements and get pacers in for spinners. 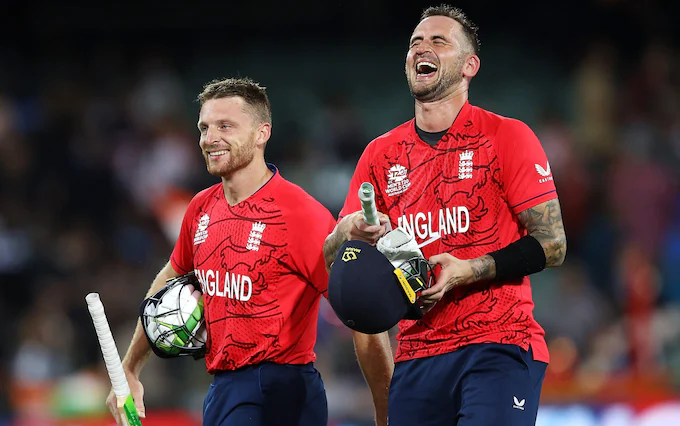 England will be coming to Melbourne with a lot of momentum and confidence from their semi-final victory over mighty India. As the famous Indian commentator put it, the run chase from England looked like a boxing contest between boxers from two different weight groups.

Alex Hales has looked in great touch ever since he made his comeback into the national side. Butler has also been consistent as an opener and led the team from the front. Harry Brook can be a vulnerability in the middle order. His last three scores have been 4 (5), 7 (3), and 18 (21). And these performances have come at 3 and 4.

Ben Stokes, who hasn’t found great success in T20Is is also a key player in the middle order. He was crucial in England’s win over Sri Lanka with a steady knock of unbeaten 42 off 36 balls. However, these two aren’t reliable when it comes to delivering impactful performances in the middle. As such, Moeen Ali and Liam Livingstone become ever more important in the England lineup.

Ali and Livingstone will be the key players to provide England with a good finish whether they bat first or second. Dawid Malan was also injured after the Sri Lanka clash and Phil Salt came in as a replacement in the semi-final.

It does look like a star-studded batting order that is also very deep as Sam Curran and Chris Woakes walk in to bat at 8 and 9. However, if the openers are back in the hut early, there’s only Stokes who can play the role of an anchor to build the innings.

In T20 World Cups, the two sides have played each other twice with the Three Lions ending up winning both those fixtures. The first such game was in the 2009 edition while the last was in 2010 when the Three Lions defeated the Shaheens by six wickets.

Jos Buttler (England): England captain Jos Buttler performed well in the previous three matches against New Zealand and then with a quickfire knock against Sri Lanka and India. England is one of the strongest batting units and that was very evident against India on Thursday.

England would be hoping that Buttler dominates the Pakistani bowling in the first six overs and give the team a flying start along with Alex Hales. Buttler has scored 199 runs from five matches with two half-centuries to his name. The skipper will be a key member of the England team to make flying starts and help them to post a competitive or chase-down total in front of a capacity crowd. 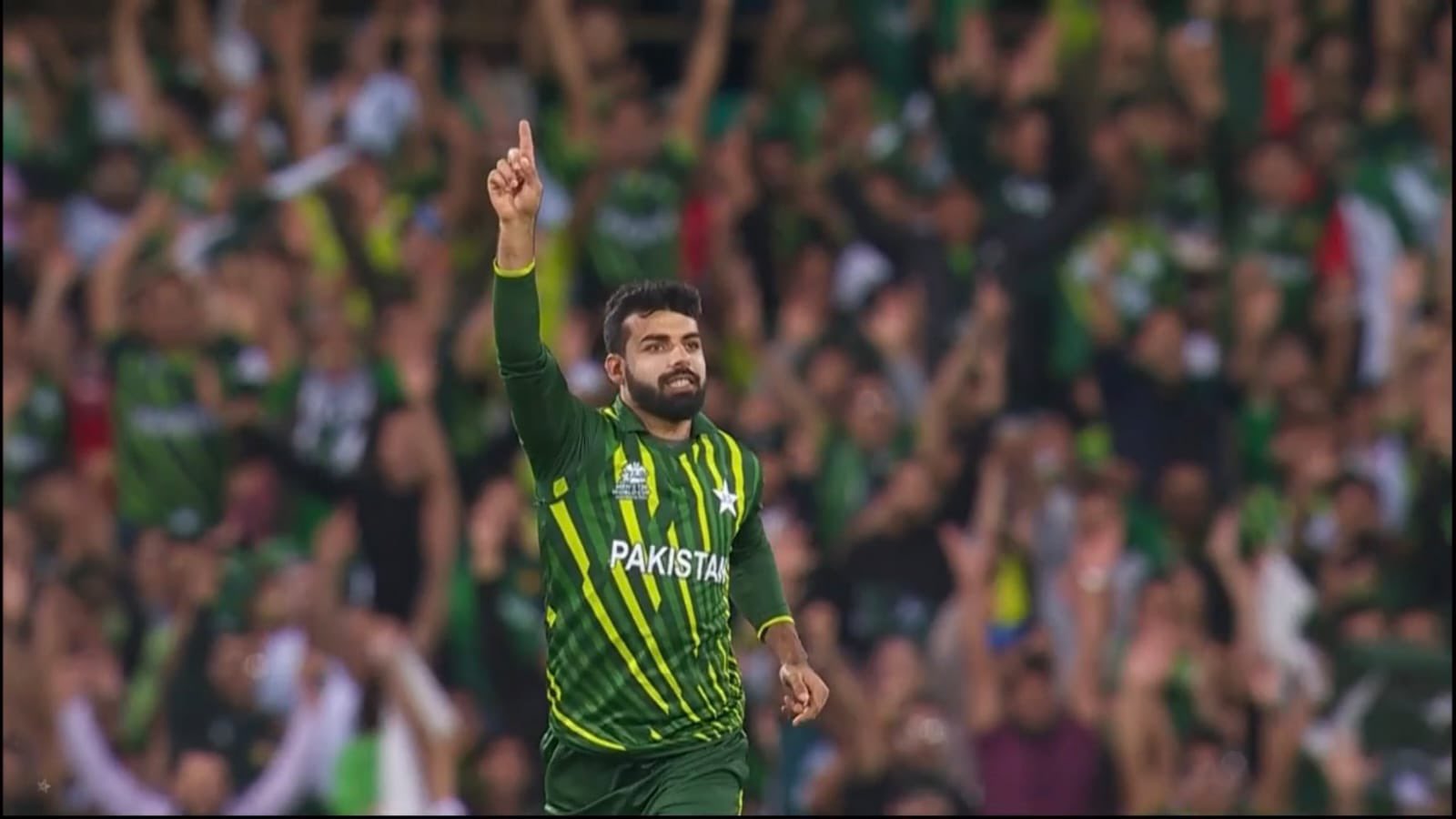 Shadab Khan (Pakistan): In a team where the quicks have dominated headlines, Shadab Khan has emerged as an unlikely hero with bat and ball in the latter stages of the Super 12 phase. With the MCG likely to aid some turn and England’s top five having just one left-hander, Shadab’s role would be huge.

The x-factor in the Pakistan line-up, Shadab might be used as a floater in the batting line-up to counter the spin trio of Moeen Ali, Adil Rashid and Liam Livingstone. His role with the ball would also be pretty crucial here and would back himself to star for Pakistan all over again as he did in this tournament.

Pakistan’s fortunes in the tournament have changed ever since Mohammad Haris was drafted into the playing XI. He has been tasked to up the Pakistani ante while batting in the Power Play after the dismissal of either opener and he has flourished in that role.

If England does dismiss him early, batters coming in next such as Shan Masood and Iftikhar Ahmed will take time to score runs at a fast pace and hence England might avoid 15-20 extra runs that Haris could have ensured for the Shaheens.

One man tasked to dismiss Haris inside the Powerplay will be Adil Rashid who would like the young Pakistani batter to go after him and in the meantime get him caught out in the deep.

Alex Hales has been scoring runs for fun in this tournament and what is more noteworthy is that all these runs have come in thick and fast. His role in the game will grow in stature if he remains unbeaten in the Powerplay.

Hence, Shaheen who has been in superb form of late should look to dismiss the English opener as soon as possible as it will expose a non-performing English middle-order soon into the game.

On the flip side, if Hales makes it through the opening phase, England will easily get to the 180-190 mark or in a good start while batting second which would make them favorites to win the game.

Both teams have bounced back after suffering a major blow early in their campaign. For England, it was the loss against Ireland and for Pakistan, the first two games had almost ended their World Cup dream.

Pakistan has seen match-winners rise from every department and that too when their key batters were struggling. England has been clinical in their finishes and the opening duo is as good as it gets.

In a close contest, we reckon, Pakistan would have the upper hand and will start as favourites in our match prediction. Our prediction is for Pakistan to win the match.