Pakistan remains unbeaten in the Super 12s stage, will face Australia in the semi-final 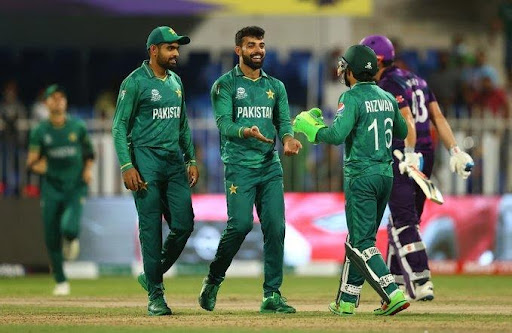 Pakistan beats Scotland by 72 runs in their last match of Super 12s stage at Sharjah Cricket Stadium to remain the only unbeaten side in the World Cup campaign.

Pakistan has marked another convincing victory against Scotland after they beat the men in purple by 72 runs at Sharjah Cricket Stadium on Sunday.

Babar Azam led Pakistan to put a competitive target of 189/4 while defending they restricted the Scottish players to 117/6.

Pakistan skipper Babar Azam won the toss and opted to bat first. The openers were cautious at the start as usual.

Mohammad Rizwan lost his wicket to Hamza Tahir right after the power play. He played quite an unusual knock of 15 off 19 balls. Fakhar joined the skipper in the middle but the partnership was a limited one.

He got dismissed to Chris Greaves after scoring 8 runs. Pakistan was 60/2 at halfway through the innings.

Mohammed Hafeez gave some momentum to the side with 31 (19) knock. Meanwhile, Babar reached his fourth half-century of the tournament.

He also became the third batter after Australian Mathew Hayden (2007) and Virat Kohli (2014) to score four half-centuries in a single edition of the T20 World Cup.

The experienced Shoaib Malik powered Pakistan to 189/4 in the allotted overs after smashing the fasted T20I half-century by any Pakistan batter and joined the fastest fifty of the tournament.

In 18 balls, Malik reached his half-century followed by half dozen maximums and boundaries.

Greaves who conceded 26 runs in the last over ended on the fixures of 2/43.

While defending, Pakistan bowlers didn’t allow Scotland to score freely. Scottish captain Kyle Coetzer (9) was dismissed by Hassan Ali while Matthew Cross (5) was undone in a mix-up at the non-striker’s end.

Cross had come down from the crease a little bit while Munsey hit a straight drive into the 90-degree angle. Imad made sure to touch the ball while it hit the stumps.

Read here: India gets disqualified for the first time in T20 World Cup

Leg-spinner and vice-captain Shadab Khan joined the party by removing Munsey (17) and Dylan Budge (0) in the 11th over.

Scotland had a little hope in between when Richie Berrington and Michael Leask were batting. The duo scored a partnership of 46 until Shaheen Shah went through Leask’s stumps, who scored 14 in as many balls.

Berrington remained undefeated for his 37-ball 54 as Pakistan restricted Scotland to 117/6.

Shadab Khan starred for Pakistan with figures of 2/14.

One thing if I have to say, we are playing like a unit and everyone has confidence and belief in everyone else. We planned to bat first…The way we’ve played cricket we’ve got good confidence. We’ll carry that into the semifinals and try to play in the same way. Definitely (Dubai) is one of the best stadiums. As a player, if you play in front of a whole crowd that cheers for you, your confidence increases.

Shoaib Malik is the Player of the Match:

As we have seen in previous games if you don’t lose early wickets you have a chance of putting a good total in the end. We were discussing in our dressing room to at least get 150 and not give too many wickets early on. If you are playing on a good strip, the goal is to take a couple of balls and then start playing your game…You take all the confidence going deep in the tournament. Yes, I’m in good form but I want to see myself more consistent to help the team. Overall, feel fit. We have to give our best shot.

I thought we bowled really well today, especially in the powerplay. When you’ve got the power in the batting line-up like Pakistan you know that they are going to find the boundaries at some stage, but I thought our guys fought really hard today. It’s a huge occasion for any team, but for Associate nations, it’s so important…A special day for us. Tough day, but to see some of these guys in action is great. We’re going to take some huge learnings from this. Playing in these conditions is different from us. And we’ll have to focus on the challenges of playing in Australia (for next year’s T20 World Cup).