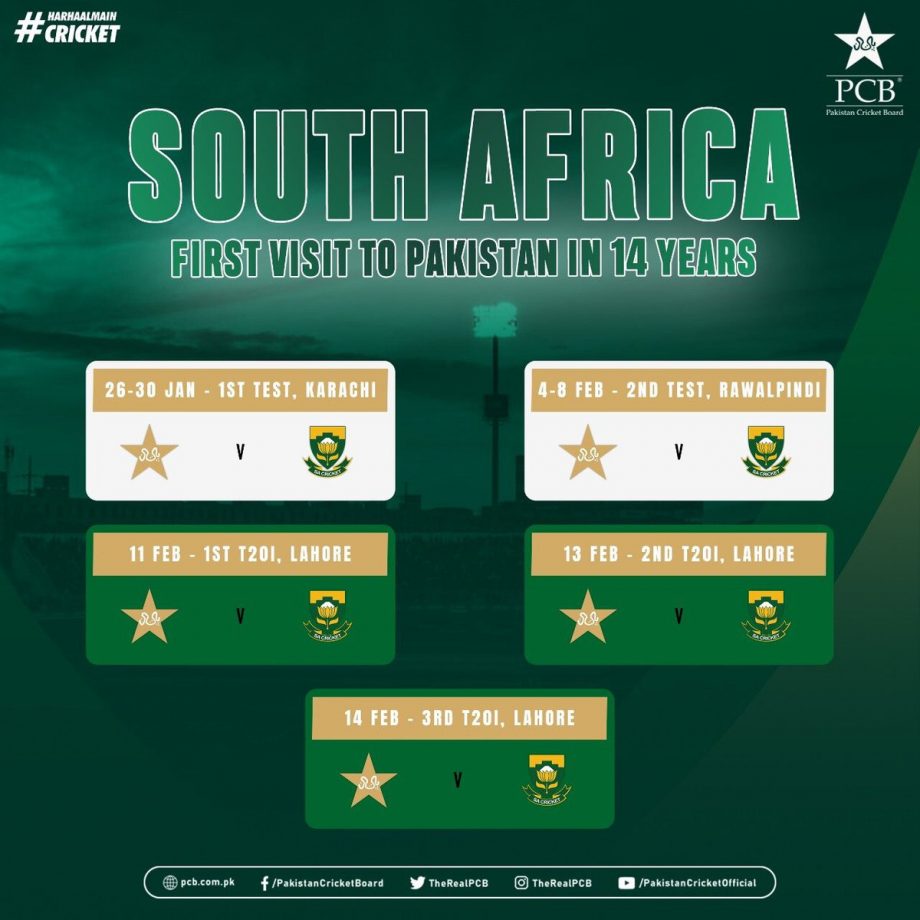 CSA confirmed their first tour to Pakistan from January 26th to February 14th for two Tests and three T20I matches. South African cricket team will be landing on Pakistani soil after 14 years. The details of fixtures and venues are shown in the supported picture.

PCB announced great news for cricket fans on Wednesday. South Africa will be touring Pakistan for two Tests and three T20I’s, starting from the end of January to the mid of February. Karachi will be hosting the first Test match, and Rawalpindi will host the second Test match. All the three T20’s will be played at Gadaffi Stadium, Lahore.

“South Africa will arrive in Karachi on January 16th and will play the first Test at the National Stadium in Karachi from 26-30 January,”

PCB said in a release.

“They will then travel to Rawalpindi, where the second Test will be held from 4-8 February. The iconic Gaddafi Stadium, headquarters of Pakistan cricket, will be the venue of the three T20Is, which are scheduled for 11, 13, and 14 February,”

Pakistan Cricket Board said that the visitors would observe an isolation period following which they will hold training sessions and play intra-squad practise matches.

‘Pleasing to see so many countries making a return to Pakistan’

The two sides have played 11 Test series so far from 1995 in which Pakistan won only one series in 2003, and South Africa won 7 series. The host, Pakistan, is at a seventh position at the points table while South Africa, the visitor, is at the sixth point on ICC Test team rankings.

“I am delighted that South Africa have confirmed their tour to Pakistan and look forward to captaining my country for the first time in a home Test at a venue where we recently won our maiden HBL Pakistan Super League title,”

“Looking at the calendar of international cricket in 2021, I am pleased we are playing more against the sides which are ranked above us. It is an opportunity to improve our rankings across all formats,”

It is the first time both the sides will play head to head T20 matches in Pakistan while they previously played two T20 series in UAE and South Africa won them both.

“It’s pleasing to see so many countries making a return to Pakistan – a proud, cricket-loving nation. Cricket South Africa is delighted to be counted among them,”

“I would like to thank the Pakistan Cricket Board (PCB) for the hospitality and transparency they showed our security contingent when they travelled over there a few weeks ago.”

“The report on their findings and recommendations gives us confidence as an organization that all of our team’s security, playing and accommodation needs will be met and that the wellbeing of the team will be the top priority,”

Zakir Khan, the PCB Director, said that Pakistan has a busy cricket schedule in the coming year. He looks optimistic, says we have achieved the goal of bringing cricket back to Pakistan. Pakistan is hosting the top sides in business next year.

“South Africa confirming a tour to Pakistan and playing matches at the three major centres is great news for Pakistan cricket and its fans.”

“The home series against South Africa will complete the process for full resumption and restoration of international cricket in Pakistan, which started in 2015,”