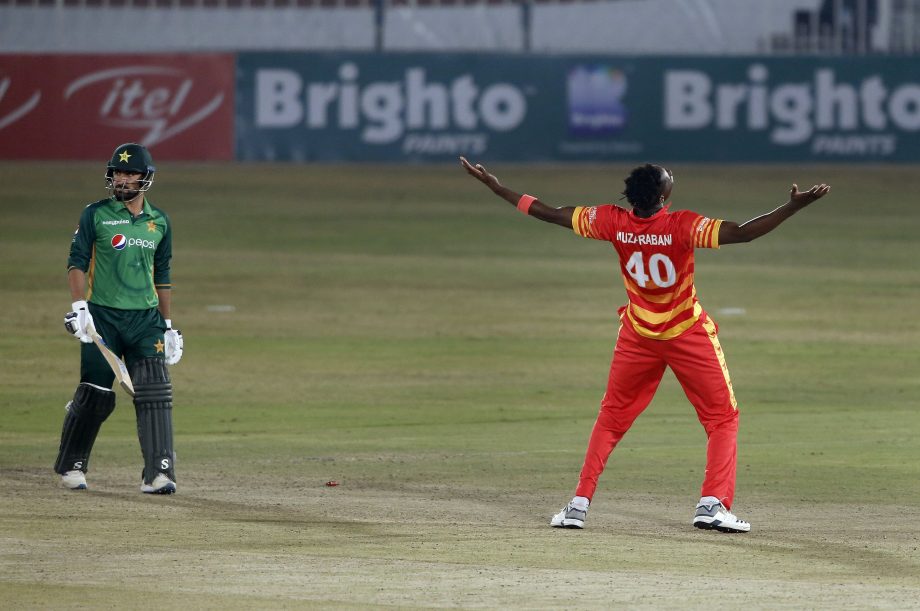 Pakistan vs Zimbabwe, 3rd ODI; Blessing Muzarbani led his team to win a thrilling final ODI from a super-over in Rawalpindi. His outstanding bowling figure wasted the hundred of Babar Azam who also could not finish the match for his team.

PAKISTAN LOST THE FIRST EVER SUPER-OVER TO ZIMBABWE

Zimbabwe’s pacer, Blessing Muzarbani helped his team win a thrilling super-over match between Pakistan and Zimbabwe with his career-best figure 5-49. It was a third and final ODI between the two countries that were hosted by Rawalpindi.

Zimbabwe won the toss and opted to bat first. After giving a slow start and losing three early wickets in the game. The 20 years old pacer, Hasnain gives a tough time to Zimbabwe’s upper-order. He immediately took 3 wickets from the top-order and shook their batting line up in just 4 overs of his spell.

Sean Williams took the responsibility on his shoulders after their early loss. He partnered with Brendan Tailor and they did a great comeback by adding 84 important runs to their side. Brendan Taylor then lost his wicket to Hasnain and left Williams to deal with all the pressure. Williams added another 75 valuable runs to his side by getting help from Wesley Madhevere.

Dropped thrice on 73,75 and 81. Seans Williams finally completed his half-century and raised his bat towards the dressing room and he also got a standing ovation from his mates.

Pakistan could not start well while this huge target. They lost the early wickets of Fakher and Imam in the first 4 overs. Babar Azam took the responsibility but no batsman could share the responsibility and Pakistan keeps losing wickets. The score was 88 with the loss of 5 wickets. Then Babar and Khushdil Shah added 63 precious runs partnership and took the score to 151/6.

Khushdil Shah lost his balance and gave a slight knick to Brendon Taylor. Until then, the score was 151/6. Pakistan badly needed a partnership and then Wahab Riaz. He joined Babar Azam and they both took their team out of the crisis situation. Their hundred runs partnership helped a lot in getting close to the target.

Batting first in the super-over, Pakistan could only score 2 runs with the loss of 2 wickets. Sikandar Raza, the right-hander batsman of Zimbabwe hit a four on the cover to make his team win a thrilling super-over.