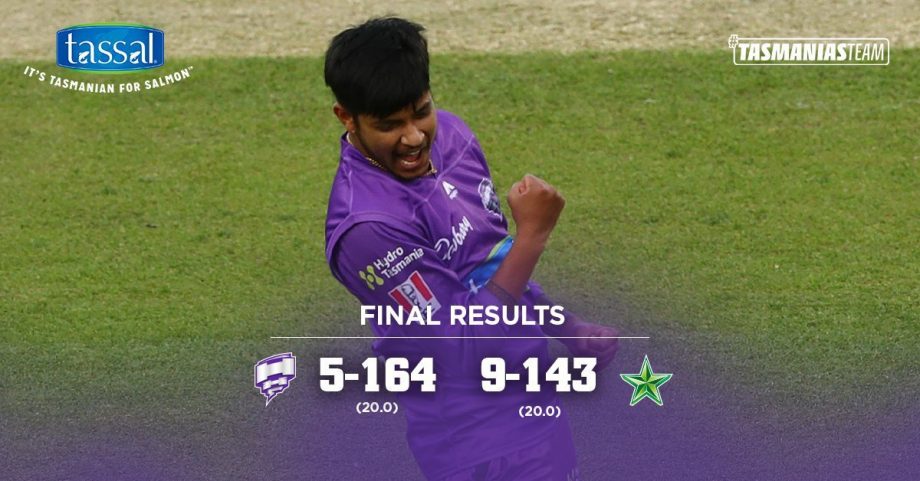 Watchful innings from Star’s skipper, Maxwell served no purpose as Stars faced an awful batting collapse during the chase. Hurricanes won the 23rd match of BBL by 21 runs and Stars lost the third match in a row at Blundstone Arena, Scott Boland as a player of the match.

Things got very different in a clash between Hobart Hurricanes and Melbourne Stars on Saturday night at Blundstone Arena, an unusual injury at the start of the game some weird actions offered by a fan brought the excitement at Bellerive Oval.

A super-hit performance from the Stars skipper, Maxwell who scored a thrilling 70 off just 37 balls went useless following a terrible batting collapse in response to the chase of 164/5 by Hurricanes.

Maxwell’s dismissal sparked a serious collapse as Stars could only manage 143/9 at the end of 20 overs, following a 21 runs defeat.

The favourites of the previous season to win the season 10 BBL title left Stars went through back to back losses in the Saturday’s clash. Things only got worse when the key Stars batsman Nic Maddinson got himself injured in the very first over, he was fielding at the boundary when he rolled his ankle on the boundary rope to get himself out.

He left the ground immediately as replaced by the X-factor Lance Morris. Hurricanes, on the other hand, were off to a patient start of 71-1 after the end of 10 overs, with unbeaten Dawid Malan 31* and McDermott 26*.

Dawid Malan, the top-ranked T20 batsman of the side scored his maiden half-century of the BBL, scoring 50 off just 32 balls. But the power-hitter went backfire as the Hurricanes only managed to score 3 runs in the 13th over before Billy Stanklake struck and picked up the wicket of Ben McDermott (31 off 35) on the very first ball of the 14th over.

Stanklake took another one and this it was  Nathan Ellis who went for a duck, mishit a slower-length ball straight into the hands of Glenn Maxwell. That left Hurricanes in a tough situation of 97-3, only three runs scored in that over.

It went further bad when Malan flicked onto deep square leg on 54 and got caught but Malan was lucky enough to get another life as Morris was given no-ball. Malan took the revenge and hit him on the free-hit full toss for a boundary.

The game was turning into some real excitement as the next ball launched into the crowd and ended up in an old gentlemen’s beer cup. He finished the drink with the ball in it but the wet ball was of no use and was replaced. 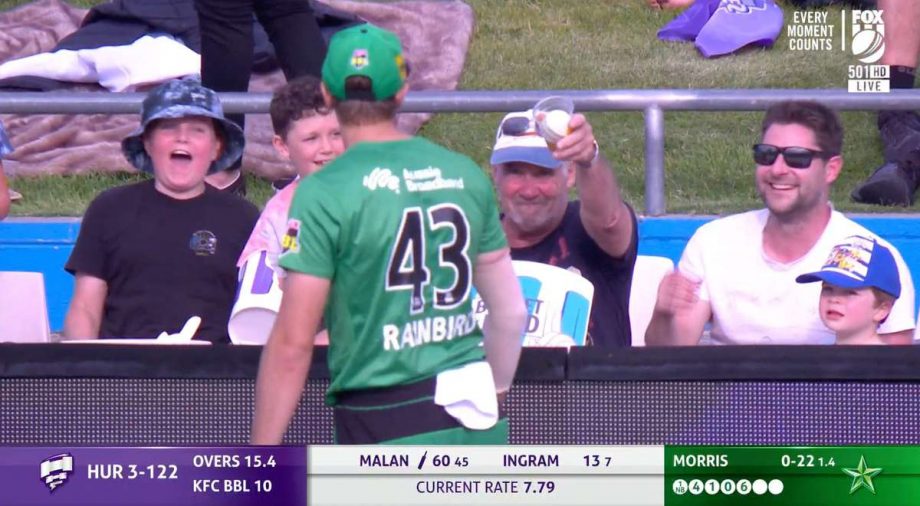 Ingram (26 off 12) hit some blistering shots before falling in the deep, Hurricanes were 148/4.

Malan scored 75 off 56 and eventually got caught in the 19th by Glenn Maxwell standing on the boundary rope. Hurricanes finished their innings with 164/5 in 20.

In the second innings, Stars off to a lousy start after Marcus Stoinis lost the wicket for 7 in the third over, flicked the ball off Scott Boland into the square leg but skied it in the air and was caught easily by Peter Hnadscomb.

Two balls later, Stars batsman showed some madness as Andre Fletcher called for a run that was never possible and got himself out by D’Arcy short from half of the pitch.

Hilton Cartwright was clean bowled by Sandeep Lamicchane in his first over, bowled a googly which Cartwright was unable to figure out until it hit the stumps.

Glen Maxwell picked up the innings from there with some pace and he scored his half-century in just 28 balls, hit maximums after maximum with some amazing reverse-sweep shots.

Thanks to the skipper, Glenn Maxwell as Stars gained the Bash Boost points for scoring most runs after 10 overs.

Johan Botha finally got rid of the dangerous Maxwell in the 14th over, hit misjudged the ball that went a long way in the air and straight in the hands of D’Arcy Short.

Earlier, when Ben Dunk was dismissed by Lamichhane, Stars were in a terrible position of 7/3. Without their backbone, Maddinson Stars expected a lot from the tail when required 45 off 32 balls.

Rainbird scored 15 off 11, Liam Hatcher 5 0ff 8 but Hurricanes had gripped tightly on the driving seat despite the superb knock from Maxwell.

Morris departed on 2 from 9 balls after an elite yorker bowled by Ellis, Hurricanes were standing on 26/6.

The Hurricanes failed to finish off the line-up but comfortably watched their 21 runs win in the death overs.