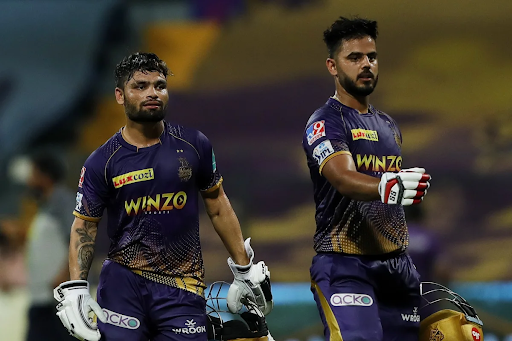 In the contest played at the Wankhede Stadium in Mumbai on Monday night, Kolkata Knight Riders showed improved performances with both bat and the ball to hand Rajasthan Royals their second consecutive defeat, with their previous loss coming against Mumbai Indians.

KKR did well with the ball to keep Rajasthan Royals to a moderate but tricky total of 152/5 despite a fine half-century from their wicketkeeper-batsman-captain Sanju Samson. And in their reply, the Knight Riders were bolstered by crucial contributions from their captain Shreyas Iyer and dependable middle-order batsman Nitish Rana.

Both Shreyas Iyer and Nitish Rana deserved half-centuries but unfortunately missed out on the milestones. The right-handed KKR captain-batsman Shreyas Iyer scored 34 from 33 balls with 3 fours and 1 six, whereas Nitish Rana remained not out on 48 from 37 balls with 2 sixes and 3 fours.

Together, Shreyas Iyer and Nitish Rana added 60 runs for the third wicket to provide their side stability in the chase, after Kolkata Knight Riders had lost a couple of early wickets. The Australian white-ball captain Aaron Finch could make only 4 from 7 balls, whereas the Tamil Nadu wicketkeeper-batsmen Baba Indrajith looked impressive in his 16-ball 15.

Toward the end, Rinku Singh was proud to be present at the moment when KKR scored their winning runs. The uncapped Indian player also did a TV interview later on, showing that he had written the number 50 — the number of times he did not get to bat in the IPL — after which he made a crucial contribution.

Rinku Singh not only presented all-rounder Anukul Roy with his KKR cap earlier in the evening but he finished at a high for himself, scoring 42 not out from 24 balls with 6 fours and a six.

For the Rajasthan Royals, their fast bowlers Kuldeep Sen, Praised Krishna and Trent Boult took one wicket each.

Earlier in the match, Tim Southee took 2/48 while Umesh Yadav, Anukul Roy and Shivam Mavi took one wicket each for KKR as the restricted RR to 152/5. Sanju Samson scored 54 from 49 balls with 7 fours and 1 six whereas Jos Buttler (22), Karun Nair (13), Riyan Parag (19). Shimron Hetmyer scored 27 not out from 13 balls with 1 four and 2 sixes while Ravichandran Ashwin made 6 not out.