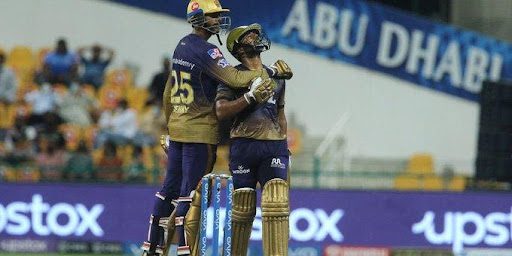 Rahul Tripathi and Venkatesh Iyer produce a dazzling performance with the bat to take Kolkata Knight Riders (KKR) across the finishing line against Mumbai Indians (MI) in Match 34 of the VIVO Indian Premier League (IPL) 2021 in Abu Dhabi on Thursday.

While Iyer smashed his maiden IPL fifty, Tripathi produced a clinical unbeaten knock of 74 off 42 balls as KKR chased down the target with 4.5 overs to spare and seven wickets in hand.

Chasing 156 in 20 overs, KKR made a solid start with Shubman Gill and Iyer racing towards 40 in less than three overs.

However, Jasprit Bumrah broke the partnership and sent Gill back to the pavilion.

Tripathi joined Iyer in the middle and he made sure that the scorecard keeps moving. Both the batsmen added 23 runs in the last over of the powerplay to leave KKR on 63/1.

The power-hitting did not stop even after the powerplay and the duo added 48 runs in the next fours overs to take KKR on 111/1 in 10 overs.

In the next over, the debutant completed his maiden half-century of IPL in 25 balls.

Tripathi then completed his seventh IPL half-century in the 12th over and made sure that KKR keeps dominating with the bat.

Earlier, KKR opted to ball first after retaining their winning side from the match against RCB. MI was put in to bat first with their skipper, Rohit Sharma returning to the side.

MI made a blistering start and Sharma and Quinton de Kock smacked four boundaries in the course of two overs. De Kock then hit three maximums in the next two overs to take MI 56/0 in the powerplay.

MI then picked up the silence for some time before de Kock creamed two boundaries off Andre Russell in the ninth over.

KKR finally managed to break the opening stand in the tenth over when Sunil Narine picked up the wicket of Rohit Sharma.

De Kock completed his half-century and the scorecard kept moving swiftly but Prasidh struck again in the 15th over to get his second.

Ishan Kishan was the next victim of KKR and Lockie Ferguson opened his account.

Kieron Pollard and Krunal Pandya then added a quickfire 30 runs before getting dismissed.