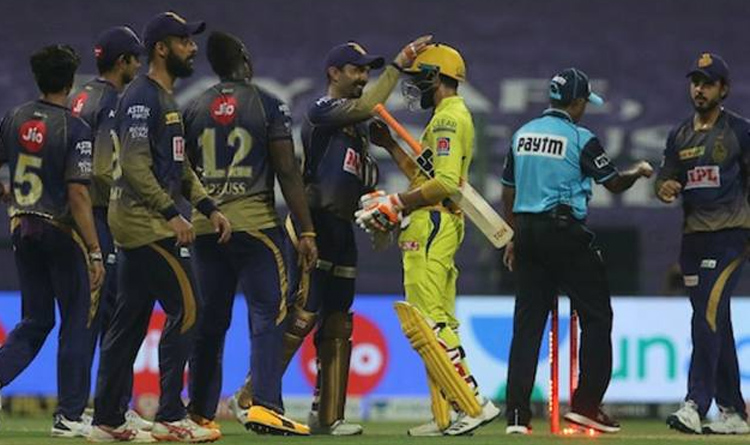 On the grounds of the Sheikh Zayed Stadium in Abu Dhabi, the Men in Yellow fell before the Knight Riders. The 21st match of the ILP 2020 witnessed the outstanding bowling by KKR, limiting CSK to 157/5 in the chase and registered a glamorous win.

Kolkata Knight Riders are back with a win giving CSK a tough beating. KKR did a tremendous job in restricting CSK from completing not a huge target of 168 runs. After winning the toss, KKR elected to bat, Rahul Tripathi and Shubman Gill came to open. The duo was moving smoothly, collecting scores before Shardul Thakur broke the partnership, dismissing Shubman Gill in the fifth over. Rahul continued and took the score over fifty. Nitish Rana and Sunil Narine contributed their part while Tripathi completed his half-century. Andre Russell was sent back with just two runs, and Dwayne Bravo dismissed Rajul Tripathi for 81 runs. Dinesh Karthik collected 12 runs and got dismissed, Dwayne Bravo smacked two wickets in the last over, and KKR managed to give a target of 168 runs.

To chase the target of 186 runs, the in-form Shane Watson and Faf du Plessis came to open for CSK. The partnership was moving ahead with back-to-back boundaries. Shivam Mavi gets the first breakthrough for KKR and stopped the killer duo by dismissing du Plessis for 17 runs. Shane Watson and Ambati Rayudu collecting boundaries took the score beyond 90. Shane Watson falls after completing his half-century off 40 balls. Things were looking difficult for CSK with the required run rate going up and losing two more wickets in the next couple of overs. Kedar Yadav and Ravindra Jadeja struggling to cover the leap with some boundaries but fell short and ended on 157/5 after 20 overs.

Shane Watson, with his 50 off 40, remains the highest score for CSK. Dhoni and Yadav got heavily trolled with memes online as KKR made them helpless in the chase.