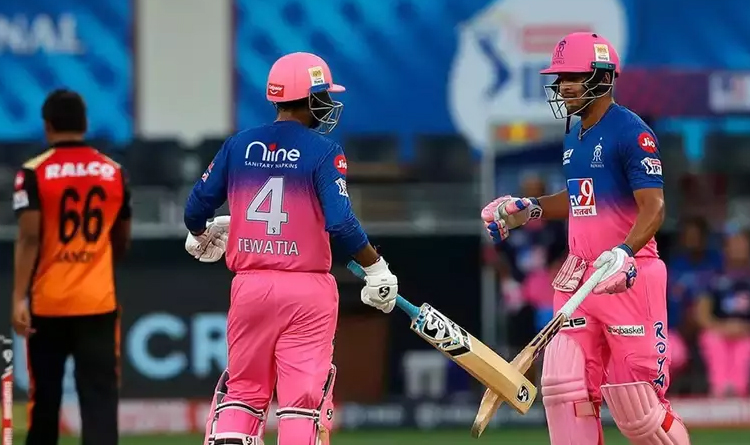 Match no. 26 of the IPL 2020 played at Dubai International Stadium witnessed a successful run chase when RR defeated SRH by five wickets and one ball to spare. SRH was at 158/4 in 20 overs, to which RR scored 163/5 in 19.5 overs and won the match with flying colors.

The stars of the match were Rahul and Riyan, with their unbeaten 85 run stand.

Winning the toss, the SunRisers Hyderabad captain David Warner decided to bat. David Warner and Jonny Bairstow came to open, but before the openers could settle, Kartik Tyagi broke the partnership by taking Jonny Bairstow out for 16 runs. Manish Pandey and David Warner’s warm partnership took the score beyond 90. Before the 15th over, Jofra Archer dismissed Warner for 48 runs. In the 17th over, Manish Pandey completed his fifty off 40 balls, but Jaydev Unadkat knocked him out in the next over for 54 runs. In the last overs, Kane Williamson and Priyam Garg scored some beautiful boundaries. Priyam got run-out on the final delivery, and SunRisers Hyderabad put up a score of 158/4 after 20 overs.

Ben Stokes and Jos Buttler came on the field to start the run chase. RR suffered an early loss when Khaleel Ahmed dismissed Ben Stokes for five runs. Soon Steve Smith got run-out in the 4th over and was sent back for five runs. In the next over, Khaleel Ahmed took his second wicket and knocked out Jos Buttler. Sanju Samson and Robin Uthappa continued pushing and took the score over 60 before Rashid Khan sent Uthappa back with 18 runs. And soon, Sanju Samson also got dismissed for 26 off 25 balls. Rahul Tewatia (45*) and Riyan Parag (42*) took matters into their hands and took RR close to the win with their legendary innings. Riyan Parag finished with a maximum and registered the winning shot in favor of RR.