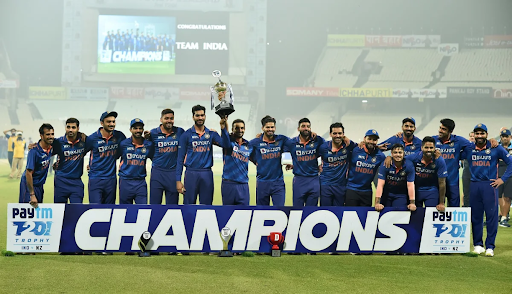 India continued to dominate New Zealand as they crushed the visitors by a huge margin of 73 runs in the third and final T20 international played at Eden Gardens in Kolkata on Sunday to win the series 3–0 after a disappointing campaign in the ICC T20 World Cup 2021.

India had earlier won the first two matches of the series comfortably while chasing, and in the third and final match of the series, the hosts once again won the toss and tried to challenge themselves after electing to bat first, knowing that the dew factor will play against them. In order to be victorious, India needed to put up a huge total on board and restrict New Zealand, and everything went as per the plan for the Rohit Sharma-led team.

In their reply, New Zealand were troubled by both Akshar Patel and Harshal Patel who shared five wickets between them to help India bowl their opponents out for a poor total of 111/10 in 17.2 overs.

Indian decided to rest their experienced players in vice-captain KL Rahul and Ravichandran Ashwin for this contest. While there was a change made at the top of the order, there was no impact on the outcome as the pair of Rohit and Ishan Kishan added 69 runs in only 6.1 overs to set the tone in favour of their team. Kishan fell for 29 from 21 balls for which he hit six boundaries, but it was the India captain Rohit who was severe on the New Zealand bowlers once again.

In their reply, New Zealand were served well by Martin Guptill who made 51 from 36 balls with four sixes and as many boundaries but he was the lone ranger for his team. Akshar produced a special performance that read 3-0-9-3 whereas Harshal returned with 3-0-26-2. The likes of Chahar, Yuzvendra Chahal and Venkatesh Iyer claimed one wicket each.

The two teams will now travel to Kanpur with Rohit set to lead India in the first Test of the two-match series starting on November 25. The second and final Test of the series as well as the tour will be played from December 3-7 at the Wankhede Stadium in Mumbai.