India vs England 5th Test cancelled: What next? 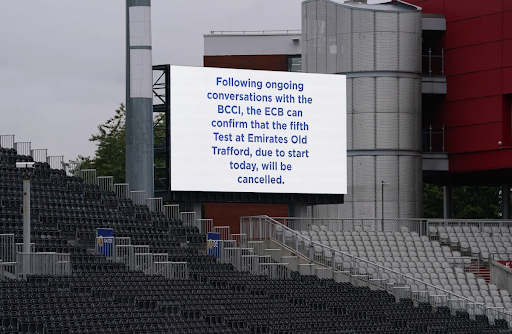 The cancellation of the fifth and final Test between India and England, slated to be played at the Old Trafford cricket ground in Manchester has come as a huge shock for the cricket fraternity all around the world, since all eyes were fixed on what could have been an intense contest of an entertaining Test series between these two countries.

But now that Manchester Test has been cancelled, there are speculations around its future, with the game supposed to be played from September 10 to 14 with plenty of reports suggesting that the BCCI has offered their counterparts in the English cricket board, a solution of postponing the match for now and playing it some other time in the future.

India are scheduled to tour England next year in 2022 for limited-overs series and it is reported that the two teams can finish off the Test series around that time, with a little window available for a Test match to be played. However, it is yet to be determined whether this will be a standalone Test match or the postponed fifth and final Test of the series played in 2021, which as of now, stands incomplete but in favour of India who had a lead of 2-1.

There are further more issues that are up for discussion between the ECB and the BCCI, who are at loggerheads given that the home team stands a chance to walk away with a 2-2 result in case the match is deemed forfeited by the Indian cricket team.

A committee of the International Cricket Council (ICC), which rules looks into disputes related to cricket matches and incidences, will be investigating into the matter related to the Manchester Test and will decide whether India really forfeited the game or they were actually not able to play a team, something that both ECB and BCCI said in their respective press releases.

It is true that players from both the camps were tired and exhausted by strict rules and regulations of the biosecure bubbles. The Indian team has been in the UK since June this year and they have had an intense past few months of playing Test cricket in one of the toughest venues in the world.

It must be also remembered that it was the Indian cricket team players who are not comfortable getting back into the group after their assistant physiotherapist, Yogesh Parmar, was found to have returned a positive coronavirus test on Wednesday. Parmar is said to have worked closely with plenty of Indian players and none of them wanted to take the risk of exposure, especially at a time when the second leg of the Indian Premier League (IPL) 2021 is only nine days away from starting in the United Arab Emirates (UAE).

The whole issue started when India head coach Ravi Shastri organised an event for his book launch two days before the start of the fourth Test at the Oval in London. Shastri was found COVID-19 positive on the third day of the fourth Test, along with other Indian coaches in Bharat Arun, R Sridhar and physiotherapist Nitin Patel.

Interestingly, the chief executive officer of the ECB, Tom Harrison was also present at the book launch event organised by Shastri. After the cancellation of the Manchester Test, Harrison told the media,

“We have to just take a breath and ask the ICC to formally adjudicate on the result of this. The BCCI have offered to reschedule the match, which is good news. But whether that is part of this series, a fresh one-match series or the first match of another series, I don’t know yet. These are the things that we need to take some time over. I know that fans will be anxious to know. Players are, too. But we do need to take some time in these situations.”

Whether India have won the Pataudi Trophy 2021 with a margin of 2-1 or England have managed to somehow avoid a series defeat, without actually playing a match, is something that only coming days will tell.