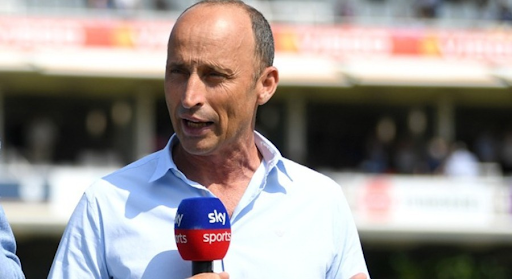 Team India’s embarrassing way out of the T20 World Cup 2022 has raised many questions over their approach to T20 cricket and on the future of some veteran cricketers while former England captain Nasser Hussain praised the ability pool that India has.

While some suggest bringing Hardik Pandya as the new T20I skipper is going to help the team change the way they go about in the shortest format, former England captain Nasser Hussain feels it’s not the players but the mindset that needs to change.

Hussain even suggested that India needs an Eoin Morgan kind of personality to make that change.

In a chat with Michael Atherton on Sky Sports Cricket, Hussain praised the ability pool that India has. However, the injury absence of Jasprit Bumrah and Ravindra Jadeja hurt them; Nasser feels it’s the team’s “timid approach” that cost them the game in the knockout clash against England.

“India has still a massive force. You look at their team on paper. You look at the players they could’ve picked. There were a couple of blows like most sides had, like Jasprit Bumrah and Jadeja being injured. But, when it comes to knockout games, the approach needs to change.

“I had even asked Ravi Shastri, he said ‘we played pretty timid cricket’ with the bat and that’s got to change. Rohit Sharma and Rahul Dravid came to change that, and they did it in bilaterals, they did it against England. Suryakumar Yadav smashed it around Trent Bridge and got a brilliant 115 (117 off 55). But then, you’ve got to take it into a game, where you know that you know that if you lose, the sort of criticism you are going to get,”

Hussain feels India returned to their old framework in the semi-final against England and was selected for a cautious approach in the powerplay. According to him, India needs somebody like Eoin Morgan who would inspire them to go crazy from ball one.

“The first time that got that into a knockout game, they slipped back into their old way of being 66 for 2 after 10.

“There’s talk about younger guys coming through but it’s not the players, but the mindset. They need an Eoin Morgan-type character to go in there and say play carefree cricket. 20 overs, go and smash it as much as you can for 20 overs. Play like you play in the IPL and smash it. Do it for India and don’t worry about the noise. Shut out the noise and we’ll be back if you are bowled out for 120,”