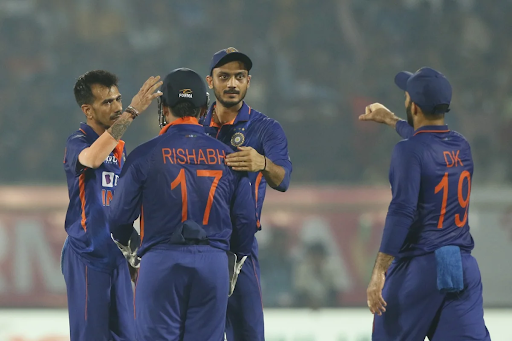 Indian opening batsmen Ruturaj Gaikwad and Ishan Kishan scored half-centuries while Harshal Patel and Yuzvendra Chahal shared seven wickets between them to power their side to an important 48 run victory in the third contest of the ongoing five match T20 series, played at Dr YS Rajasekhara Reddy ACA-VDCA cricket Stadium in Visakhapatnam on Tuesday night.

A strong start from their openers Ishan Kishan and Ruturaj Gaikwad promised India a total in excess of 200, but the middle order could not sustain the momentum as they squandered the opportunities of putting up another big total that could have helped and intimidate South Africa.

After all, India had lost the first two matches of the series despite putting up handsome scores on the board and once again on Tuesday night they were required to have bowled really well, which apparently they did.

India managed a strong total of 179/5 in their 20 overs against which the South African side was bowled out for 13 runs in 19.1 overs with Harshal Patel returning with figures of 3.1-0-25-4. India’s seasoned legspinner and their highest wicket taker in the format, Yuzvendra Chahal, was impressive on Tuesday night as he returned with 4-0-20-3.

It was a strong 97 run stand for the first wicket between Ishan Kishan and Ruturaj Gaikwad which set the tone in favour of the home side on Tuesday night. The right-handed Ruturaj Gaikwad put behind disappointing outings in the series so far to score 57 from 35 balls with seven fours and two sixes whereas Ishan Kishan cracked 5 fours and 2 sixes to make 54 from 35 balls.

While the following two batsmen — Shreyas Iyer (14) and Rishabh Pant (6) — did not make a mark for their side, all-rounder Hardik Pandya did well to make 31 not out from 21 balls with 4 fours while wickets kept tumbling at regular intervals on the other end.

For South Africa, the most impressive among the bowlers was Dwaine Pretorius, who snaffled a couple of wickets to return with 4-0-29-2. Kagiso Rabada, Tabraiz Shamsi and Keshav Maharaj took 1 wicket apiece.

On their part, there were many South African batsmen who got starts but could not convert them into big innings, like they had done in the first two matches of the series. Reeza Hendricks fell for a 20-ball 23, Dwaine Pretorius made 20 from 16 balls, Heinrich Klaasen made 29 from 24 balls with 3 fours and 1 six while Wayne Parnell waged a late battle to make 22 not out from 18 balls.

The two teams will now head over to Rajkot where they will face-off in the fourth match to be played at the Saurashtra Cricket Association (SCA) Stadium on Friday, while the fifth and final game of the series will be played on Sunday at the M Chinnaswamy Stadium in Bangalore on June 19.