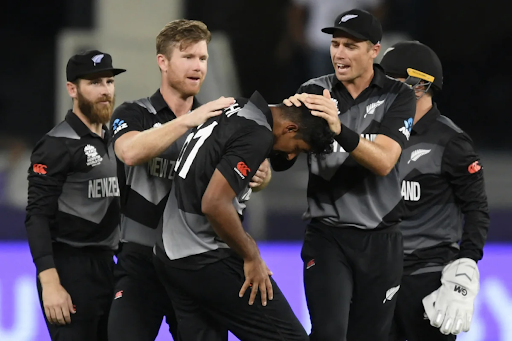 India’s chances of making it to the semi-final of the ICC T20 World Cup 2021 suffered a massive jolt on Sunday night when New Zealand handed the Virat Kohli led team an eight-wicket thrashing in their Group 2 match played at the Dubai international cricket stadium. With two defeats in as many games so far in the World Cup, India are clearly struggling and have been virtually knocked out from the race to make it to the final four of the competition, in which they had entered as title favourites.

After failing with the bat against Pakistan in their first match last Sunday at the same venue, India produced yet another embarrassing performance with the bat, struggling to get runs throughout their innings after they were asked to bat first by New Zealand. India made 110/7 in their 20 overs with Ravindra Jadeja (26*) and Hardik Pandya (23) providing late resistance to push their innings past the 100-run mark after their star-studded top order failed once again.

India had to make one change in their batting line-up went middle-order batsman Suryakumar Yadav was ruled out of the contest due to a back injury, following which they picked the aggressive wicket-keeper batsman Ishan Kishan and sent him in the opening slot in the company of KL Rahul. Rohit Sharma, the regular opener, came in at No 3 while India captain occupied the No 4 slot in place of the injured Suryakumar.

Kishan failed to make any sort of impact following impressive recent performances. The left-handed batsman was dismissed for 4 by New Zealand fast bowler Trent Boult, who also got rid of Pandya 23 later on in the innings with the all-rounder struggling to get any sort of momentum with the bat.

Rohit and Rahul tried to revive India’s innings with a counter-attacking partnership but their stand did not last long enough. Rahul perished at the score of 18 from 16 balls with the help of three boundaries, getting caught by Daryl Mitchell off Tim Southee, whereas Rohit Sharma (14) was caught by Martin Guptill off the bowling of Ish Sodhi.

The birthday boy, New Zealand spinner Sodhi, gave himself the best form of gift when he got India captain Kohli caught for nine near the boundary ropes, which reduced India to a poor total of 48/4 in 10.1 overs. Rishabh Pant (12) failed to make any sort of impact and the huge challenge of putting up a competitive total on board was left for the likes of Pandya and Jadeja.

Pandya hit on the one boundary and made 23 from 24 balls whereas Jadeja cracked one six and two fours to make 26 not out from 19 balls which took India to 110/7, a total which was never going to be enough on any kind of pitch anywhere in the world.