Gayle powers West Indies to a series win against Australia 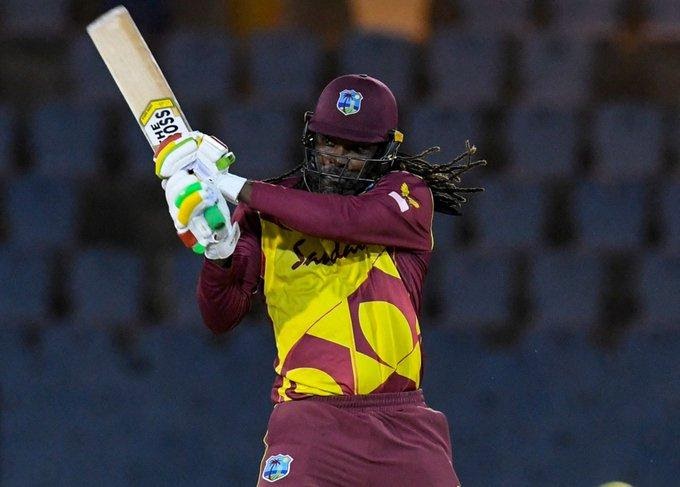 Universal Boss, Chris Gayle came up with a blistering cameo of 67 in the 3rd T20I to give West Indies a series win and a dominating lead of 3-0 in a five-match T20I series against Australia.

Before the start of the 3rd T20I, Dwayne Bravo had reasoned why West Indies should care about the performance of Chris Gayle as his inclusion in the playing XI itself is a fear factor for the opponents.

However, in the 3rd T20I, Gayle was not only the fear factor but his cameo of 67 off 38 powered the hosts towards the target with 31 balls to spare to win the series with a dominating lead of 3-0.

Australia had won the toss and decided to bat first. Australian opener, Mathew Wade started the innings with the boundary. He was also in good touch in the last two T20’s and In the third one, he was continuously putting the boundaries but failed to go on with the job as he was bowled by Obed MCcoy.

Mitchell Marsh was also in good form in the first two matches but he was pin downed in front by Fabian Allen while attempting to sweep.

Moises Henriques tries to hit boundaries and wanted to set a big total but couldn’t do that and lost his wicket in the last over of the match.

Australia didn’t set a big total and ended the innings with just a total of 141-6 after 20 overs.

West Indies, while chasing didn’t put a great start when Mitchell Starc took the wicket on the very first over of the innings and this is his first wicket in the whole series.

After the first wicket, Gayle (Universe Boss) comes out and started the innings with the boundaries. He was out of form and didn’t play well in the first two matches.

But this time, he returned in an outstanding form. Josh Hazlewood came to bowl his first over and paid the cost by giving 19 runs when Gayle hit him a couple of boundaries.

Gayle destroyed the Australian bowling with his bat and made it easy for West Indies to win this match and the series.

Riley Meredith ended Gayle’s night with a slower ball, but his 67 runs off 38 deliveries helped to win this series.

After Gayle’s wicket, all responsibilities were left to stand in-captain, Nicholas Pooran and he also took the responsibility by hit the winning runs in the 15th over and sealing a victory by six wickets. By Gayle’s Innings, the match and the series were done.

Australia hadn’t lost four or more T20s in a row since November 2018.

“My main focus is the world cup. Don’t mind the numbers, Chris Gayle not getting the runs soon to be 42,”

“You guys should be happy to see Chris Gayle still on the field. Hopefully, Chris will last as long as possible. Just cherish those moments, commentators. No stats about Chris Gayle not scoring a half-century. Just respect the Universe Boss and let him have some fun,”

The fourth T20 is to be played on Thursday in St Lucia.