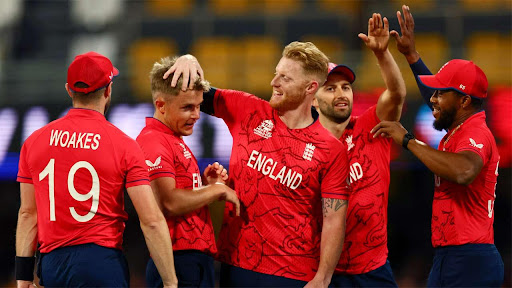 Jos Buttler says we've had success batting first against Australia, so be brave and take the positive option, knowing your need to take wickets

England had won the toss and elected to bat first and they put a 179 runs target on the board, England’s victory in the final group game against Sri Lanka on Saturday should be enough to qualify for the semi-final, excepting a critical net run-rate swing.

England had won the toss and elected to bat first. After a relatively quiet start, seeing off Trent Boult and Tim Southee’s new-ball bursts, Alex Hales took charge in the second half of the powerplay, dashing to 37 off 25 as England took 48 in the power play.

He hit the first ball of the fifth over straight back over Southee’s head for six and then hit consecutive boundaries through the off-side.

Williamson thought he had taken a huge catch to dismiss Jos Buttler for 8 in the last power play over, diving low to one side to snaffle a miscue off Mitchell Santner, however, replays confirmed the ball had wriggled through his hands and hit the ground before he snaffled it at the second attempt.

He apologized, and said afterward:

“I knew I’d bobbled it and thought I’d squeezed it into my chest… a little bit embarrassing in the end.”

England struggled against spin through the middle on a used pitch which offered plenty for Santner and Ish Sodhi, who took 2 for 48 in eight overs between them.

Hales was stumped while charging Santner in the wake of arriving at a 39-ball half-century, and Buttler dropped again on 40 when Daryl Mitchell put down a clear opportunity off Lockie Ferguson.

New Zealand hauled things back with regular wickets: Harry Brook was caught at long-on looking for consecutive sixes, Buttler was run out and Stokes was stuck lbw by Ferguson, but England’s lower-middle order kept on swinging and scrambled up to 179, which looked a decent score on the board.

Buttler threw Moeen the new ball and was almost compensated with the wicket of Devon Conway, who hauled his back foot behind the crease just before Buttler whipped the bails off after Moeen beat him on the outside edge.

Buttler himself was vital to the wicket when Conway fell, hurling himself low to one side as Conway endeavored a paddle-scoop off Chris Woakes.

At the point when Finn Allen tumbled to Curran’s short ball, choosing Stokes on the rope, New Zealand were 28 for 2 after five overs and battling, but Phillips was rapidly ready.

He began streakily, inside-edging a 96mph/155kph Wood thunderclap the speediest ball of the World Cup to date – past his leg stump, and afterward endure thanks to a peculiar drop from Moeen.

Stokes, who had harmed his left index finger while taking the catch to dismiss Allen, removed Williamson in his only over, the ball directed to Rashid at short third, and Buttler sensed an opportunity.

He brought Wood back for the 16th over, a move justified by Neesham’s miscued pull, which Curran settled under at deep midwicket and celebrated with thunder as he turned to the crowd.

Woakes, whose 19th over in the 2021 semi-final had cost 20 runs, then struck at the death as England closed in, having Daryl Mitchell caught at long-on off a slower ball by Chris Jordan, on as a substitute fielder for Livingstone.

Curran then removed Phillips to end the game as a contest, again caught by Jordan, and closed it out with a combination of yorkers, bouncers, and slower balls at the death.

England’s victory in the final group game against Sri Lanka on Saturday should be enough to qualify for the semi-final, excepting a critical net run-rate swing.

New Zealand’s net run rate is healthy enough that they will almost certainly qualify for the semi-finals by beating Ireland by any margin in their final group game.

“Credit to the way England played, they played beautifully, put us under pressure from the get-go, and were clinical. It was a slightly above-par total. We tried to take it deep, but credit to the way they bowled. It was a fair surface; we were in it in the second half but needed a few things to go our way. Tried to target certain areas of the ground and take it deep,”

“We had a poor performance [against Ireland] but a lot of confidence in the group, we left it all out there tonight. In a ruthless tournament, SA went out last year with four wins out of five. You expect to be under pressure. I think with our line-up, we bat deep, which allows us to take it on an over earlier than you might. The wicket was tricky, but Hales played a great knock and took the pressure off,”