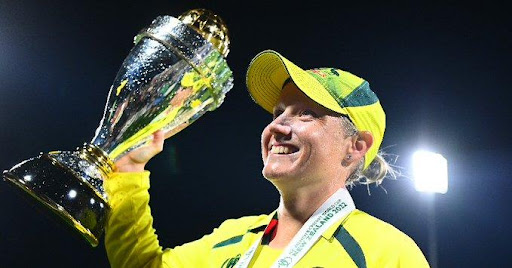 Alyssa Healy on Sunday said that he had never imagined even in her wildest dreams that she would play such a massive knock in an even like World Cup Final against England.

A record-breaking ton from the Australian wicket-keeper batter Alyssa Healy, whose effort of 170 set up the base of triumph for the Australian women on Sunday, said that she has “seen it all” been there and done on most of the big days.

On the back of Hailey’s marvelous ton, Australia bossed their way to a record-extending seventh Women’s World Cup title with a dominating 71-run victory over the traditional rivals England, marking their unmatched performance in the tournament.

“I’m 32 and I’ve seen it all. Our team sets out to win events like these and everyone is sort of keen to get out there and do just that, grateful for the opportunity,”

“You probably couldn’t have asked for anything more. Proud of the batting unit. We have done some amazing things this whole tournament, so to be able to do it one more time on the biggest stage was impressive,”

Healy said after the title win.

For Hailey, the way they marked their victory was unexpected and beyond her imagination.

“Never in my wildest dreams did I ever think I’d do something like that so it is pretty cool.”

During her epic knock, Healy also became the player with the most runs in a single edition of a World Cup.

She broke down the record of the New Zealand great Debbie Hockley, which led for 25 years, but also became the first woman cricketer to score 500 or more runs in a single edition of the ICC tournament.

The recent record for Hockley stood in the 1997 World Cup in India in which she had scored 456 runs but Healy and her partner Rachael Haynes broke her record on Sunday after scoring a total of 509 and 497 respectively.

“We knew the first 10 overs was going to be the most challenging part of the game and we got two world-class bowlers swinging the ball.

“We just knew we had to hold our nerve. I enjoy batting with Rach (Rachael Haynes) and it’s what we set out to do and we ticked that box.”

She said Haynes should have won the player of the tournament award for her consistency.

“No way (on two fifties and two hundred). I shouldn’t have received this award but Rach should have because I just turned up for the last two games.”

Healy, who was dropped on 41 in the Final of the World Cup, also set the record of the highest-ever individual score in a World Cup final across men’s and women’s cricket.

“I think everyone has worked very hard for this. It has been a five-year wait for a title people said we would have had. Will reflect on the three months that we have had,”

said Healy who was also a member of the Australia squad in the 2017 edition.

“Not sunk in yet. Special game of cricket, very high scoring. It is something we have been working towards for a long period of time. To get over the line was pretty cool.

Australian skipper Meg Lanning also termed the knock of her teammate an “incredible one”.

“Healy’s knock was incredible. To do it in a World Cup final, I am not surprised; she’s done it before as well. We’ve spoken about being patient at the start before exploding and that’s what happened.”

For Lanning, one must savor the sweet taste of victory before anything else.

“We’ll celebrate this one first. We have not looked ahead too far, to be honest. It hasn’t been easy but it is nice to be able to get to the end of this block and say we are the champions.

“Thanks to Heather and the team, we knew it would be a competitive game. Thanks to the ICC, our coaches, and support staff. Appreciate for all that you do and to the team, well done and we’ll celebrate and enjoy this,”