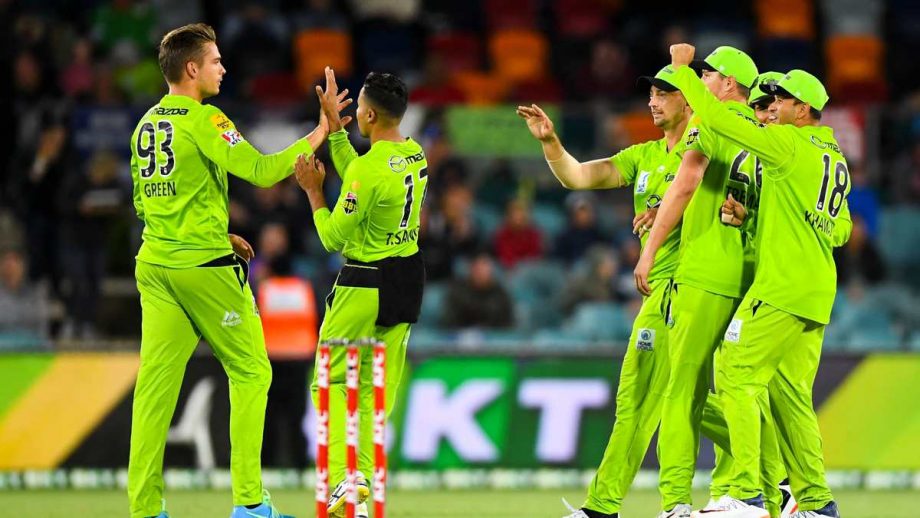 Sydney Thunder outclassed Melbourne Stars on match number 19 at Manuka Oval on Tuesday. Alex Hales hit the fastest half-century for the franchise before setting up the record total of Sydney Thunder, 219 for 20 overs. Chris Green and Tanveer Sangha put brakes on Stars to seal a 75 runs victory for their side.

The England cricketer, Alex Hales played a blistering inning with his bat scoring 71 runs off 29 balls following five maximums and eight fours, putting an 89 runs opening stand alongside Usman Khawaja. Hales was dismissed Nic Maddinson after Callum Ferguson picked from where Hales left to score his own half-century.

Needing 11 runs per over, Stars went with aggression for the three overs but dropped it down in the fourth over when Chris Green was introduced in the bowling. With the first 16 balls bowled, he did an amazing job of 2/6, plucking the openers of Stars, Marcus Stoinis and Andre Fletcher.

They were never in a game, thus played a lopsided performance to throw away the game by 75 runs.

Right on the money

Sydney Thunders bowled struggled against Alex Hales as they were not able to stop the flow of boundaries coming, especially the spinners. His first six came on the ball of Alex Hales, charging the skipper a mighty one over long-on. He swept his bat all 360 degrees to hit a boundary to the Afghan bowler, Zahir Khan in the fifth.

He took Adam Zampa in the next over slog sweeping him two times in an over to bring his 50 for only 21 balls. Alex Hales found the process effective as he hit a slog sweep over the roof in the midwicket stands, bowled by Nic Maddinson and repeating the same feat on the next ball. By that time of the innings, Thunders were in great flow as they were scoring 10 an over and they never stopped for the rest of the innings.

The skipper of Stars, Callum Ferguson played an innings full of efficiency and dedication. After taking over the innings from Hales, he ate only 5 balls from 33 balls. He kept rotating the strike with the boundaries coming in over to increase the score with great pace to keep the Stars bowlers under pressure.

Although he got a life in the duration of his half-century, he used the chances every bit. He hit the first six, captain on the captain, to Maxwell in the 10th over. He was fortunate enough to get a chance off the bowling of Zahir Khan on 25 at midwicket, dropped by Ben Dunk. He hit a single delivery towards mid-off to bring-up his fifty over the bowling of Adam Zampa. A six later from Chris Green took Thunders above 200, a total that Thunders never achieved before.

The duo, Tanveer and Sangha shines

There is no argument that Stars have the most destructive batsman in BBL this year, especially Marcus Stoinis coming back to the side after missing the previous match when they were defeated by Sixers with one-wicket. But it happened opposite as expected when their top three attacking batsmen failed to perform as Adam Milne, Daniel Sams and Chris Tremain bowled well enough, took the pace off the ball.

Green caught the big fish, after bowling two dot balls Stoinis hit on the extra cover where he found Sams and dismissed on 27. Sangha choked the run-rate further after conceding only three singles in the fifth over. Fletcher was struggling to get a boundary but he failed to accomplish as caught by Milne on deep midwicket, bowled by Green. Hilton Cartwright stumped in the eight after being hopeless, Sangha was on the bowling end.

Maxwell and Pooran hit three boundaries in the next six overs before getting dismissed. Ben Dunk spoiled the figures of Green by hitting two consecutive sixes but went skier and caught on the very next ball. Liam Hatcher was next on the list, caught on the ball of Sangha as an eight dismissal. Chris Tremain finished the tail in the 20th over to cement the victory.