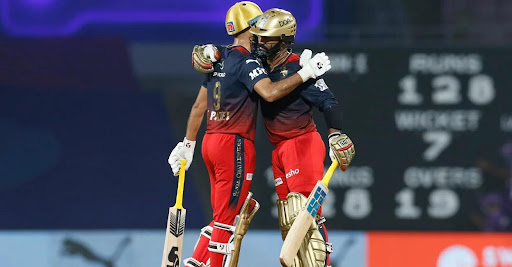 Former RCB skipper Virat Kohli weighed Dinesh Karthik all in praise after his match-winning knock against DC on April 16 and said that AB de Villiers will be proud watching him play from Pretoria.

Dinesh Karthik is having a great hold with the bat in the ongoing Indian Premier League 2022 season for Royal Challengers Bangalore. The right-hander has so far scored 197 runs in the six matches he played for Faf du Plessis-led RCB and has also been able to consistently contribute to the match-winning cause.

RCB was struggling against DC but Dinesh Karthik’s unbeaten heroics of 66 off 34 saved his side from collapse to put on a competitive total of 189/5 in 20 overs. Eventually, RCB managed to win the game and they earned the third spot in the points table.

Karthik’s teammate Virat Kohli has weighed him all in praise for his superb batting this season for RCB. The former skipper said that AB de Villiers will be proud watching him play for RCB while sitting in Pretoria as the right-hander has got his side across the line on different occasions.

Kohli also said that a lot of people in the higher management are looking at the batting of Karthik to take further notice.

“I want to also mention that I am very happy that DK is so clear in his goals and I want to tell you that you have a presented a strong case for yourself moving forward in playing T20 cricket not just for RCB but I am sure lot of people are taking notice at the highest stage as well. You mentioned AB de Villiers, he will be very proud watching in Pretoria and seeing you take us over the line and finish games for us,”

Kohli told Karthik in a video posted on iplt20.com.

“I do not want to say long it may continue because I know it will because I know you are in that space. It was an honor watching you bat against the Delhi Capitals,”

During the conversation between Karthik and Kohli, the latter addressed the wicketkeeper-batter as “Man of the IPL”.

For his performance against Delhi Capitals, Karthik was awarded Man of the Match. And during the presentation ceremony, the right-hander said that he will try his best to be a part of Team India.

“But I must admit that I have a bigger goal. I have been working really hard. I have been trying to do everything to be a part of the Indian team,”

For RCB, Glenn Maxwell also played a crucial knock of 55 runs and Shahbaz Ahmed played a useful cameo of 32. With the ball, Josh Hazlewood came up with three wickets and in the end, RCB got across the line with 16 runs.