A whitewashing defeat for the visitors at the hands of arch-rivals: Player Ratings from New Zealand’s ODI series defeat against Australia   

New Zealand‘s streak of winning six consecutive One-Day International series from March 2020 comes to an end as they suffered a whitewashing defeat on Australian soil. The Blackcaps were squashed by 3-0 by their arch-rivals Australia in a three-match away ODI series.

Let’s take a look at the player ratings and detailed performances report of Team New Zealand from this away series defeat against Australia.

Martin Guptill (1/10): It’s been a long time since the star Kiwi opener has performed according to his reputation for his nation in the 50-over format. The 35-year-old could score just eight runs from two appearances as his individual tally was the lowest among all 14 visiting players who participated in this tour. The disaster class in the first two innings forced the team management to leave him out and go for Finn Allen in the remaining fixture.

Finn Allen (6/10): Allen was brought to the Blackcaps playing XI in the Third ODI as the team management wanted to try out the available young options on the bench. He replaced the out-of-form veteran Martin Guptill in the lineup and opened the Kiwi innings along with Devon Conway. His refreshing stand of 35 runs consisting of six balls and a solitary provided a good start for the chasing side.

Devon Conway (7/10): The 31-year-old T20 specialist opening batter gradually cementing his place in the 50-over side of the Blackcaps. Conway kick-started the tour with a decent knock of 46 but couldn’t sustain further the momentum in the following game as his batting turn was restricted to five runs. He got a good start in the third ODI but failed to convert it into a big one and was dismissed by Sean Abbott on an individual score of 21. 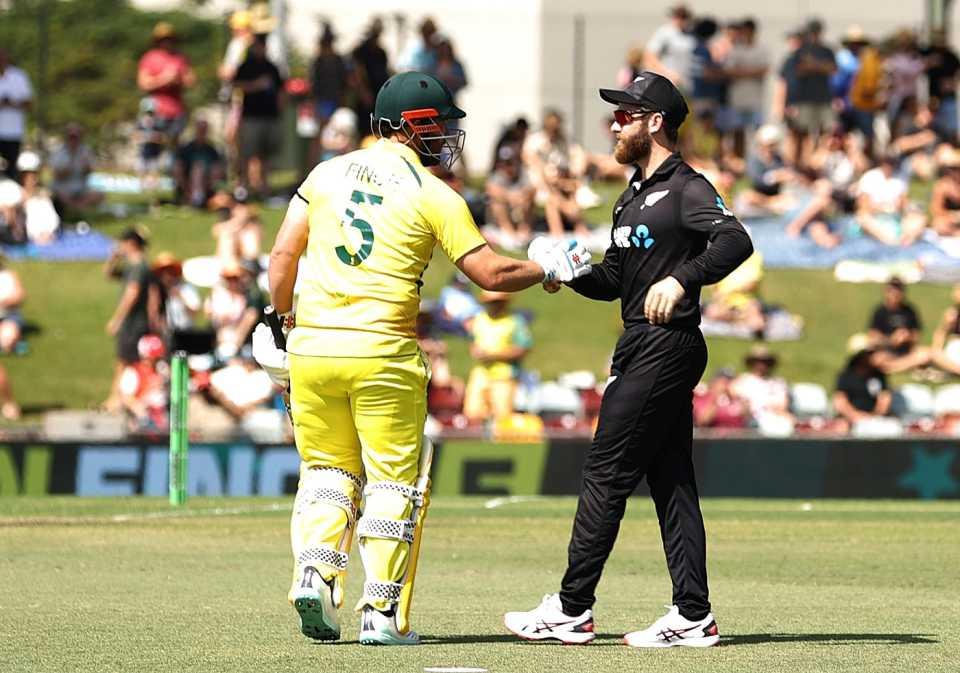 Tough times for the Kiwi skipper

Kane Williamson (8/10): It was a disastrous away tour for the New Zealand captain as his team couldn’t stand upfront with the hosts in their strengthened format. Williamson was the highest run-getter from the Blackcaps after fetching 89 runs from three innings of this series. His contribution of 45 runs and 81-run partnership with Devon Conway for the third wicket played a key role in the first-inning total of 232 runs.

The modern-great batter was the highest scorer of the team with 17 runs from 58 balls as his side tragically got bundled out on the minimal score of 82 in the Second ODI. While chasing the target of 268 in the dead-rubber fixture, Williamson held one end for a long time but the run-out dismissal in the 28th over cut short his stay on the battlefield.

Glenn Phillips (7/10): The hard-hitting batter replaced Michael Bracewell in the Playing Eleven for the dead-rubber fixture to make his career’s sixth ODI appearance. He brought fresh energy on the pitch through his positive intent and went on to put up a fighting stand of 47 runs consisting of two fours and two sixes. New Zealand’s chances were quite active until his presence on the field

Tom Latham (5/10): The current vice-captain led them to the away triumph against West Indies and also won the Player of the Match award in the decider encounter but couldn’t replicate it against the neighbourhood rivals.

Latham kick-started the campaign with a fighting 43-run stand in the opening game. However, the Kiwi wicket-keeper could fetch 10 runs in the rest of the two games including a duck while chasing 196 in the Second ODI.

Daryl Mitchell (5/10): The purple patch of the 31-year-old finally slows down as the batting all-rounder couldn’t excel against the Kangaroos. Mitchell got the time to observe the ball and settle down a little bit on the pitch in each and every game of the series but failed to prolong it on all occasions. His bowling capabilities were underused by the Blackcaps skipper as he only got two overs to bowl throughout the tour.

Mitchell Santner (8/10): In the presence of so many big names in the Kiwi batting unit, it was the bowling all-rounder Mitchell Santner who scored the third-most number of runs for them. His tally of 59 runs from three innings at an average of 29.50 was the sixth highest in individual batting contribution in the series.

He may have got only two wickets under his helm however, his economy rate of 4.48 played a key role in building pressure on the opposition batting unit during the middle overs.

James Neesham (4/10): The 31-year-old pace-bowling all-rounder was seen donning the role of the fifth bowler but couldn’t capitalize on the opportunity despite bowing 21 overs across three fixtures. His best contribution with the bat came in the Third ODI where he scored 36 runs at a pacey strike rate of 105.88 while batting at No. 7. Neesham had a 61-run survival partnership with Glenn Phillips for the sixth wicket which brought the Black outfit back into the game.

Michael Bracewell (3/10): The triumphant run of the Wellington spin-bowling all-rounder finally comes to an end as he suffers through the first-ever major failure in his tiny ODI career which commenced in March 2022. Bracewell could not get a single wicket after bowling six over and scored just 19 runs with the bat from the first two games.

As a consequence of not performing in the given chances, he was dropped from the playing XI for the final encounter as the Blackcaps management changed the team combination and turned up with one extra batter in the side. 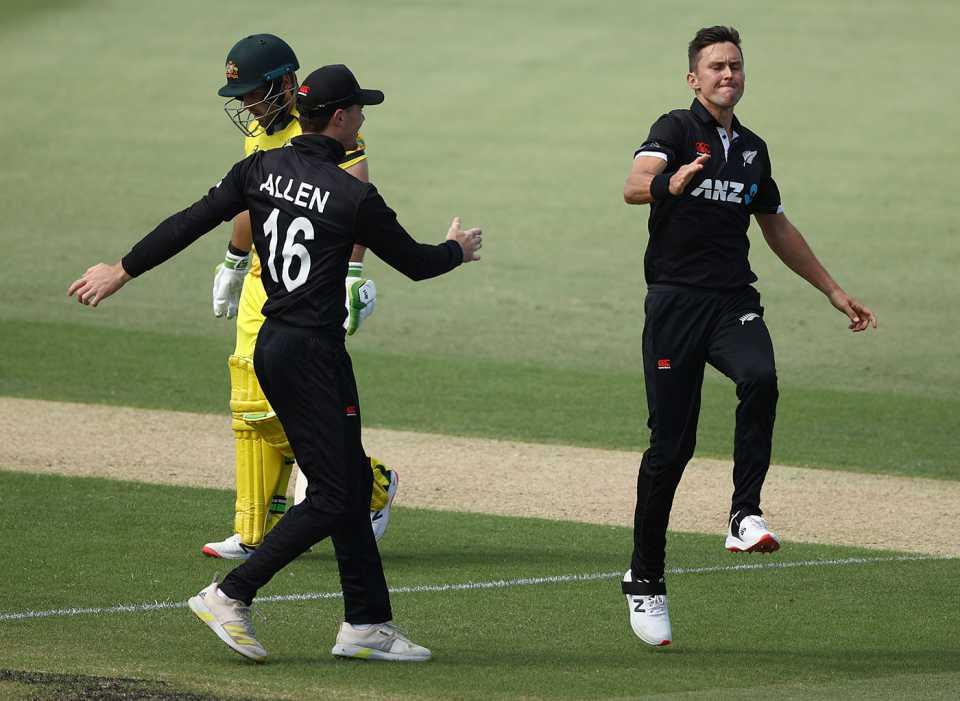 Trent Boult is mapping new heights in the white-ball cricket

Trent Boult (10/10): After a successful ODI series against West Indies, the strike Kiwi pacer continued his triumphant run in the Australian conditions too. The 33-year-old speedster was the highest wicket-taker of the Chappell-Hadlee Trophy, striking a whopping total of 10 wickets in just three games against the arch-rivals.

He achieved astonishing bowling figures consisting of a 10.30 average and 2.13 economy rate while his bowling strike rate of 18 was also the lowest among all bowlers in the bilateral competition.

Boult kicked off the series with a bang by registering four-wicket hauls in the first two games although all his diligent efforts eventually went in vain. His individual figures of two wickets for 25 runs in 10 overs also turned out to be the best bowling performance from Blackcaps in the third and final encounter.

Matt Henry (8/10): It was a memorable individual campaign for the Christchurch-born right-arm pacer who bagged five wickets at a fine average of 16.60. Despite being featured only in the first two fixtures, the 30-year-old talisman still ended up among the Top 4 highest wicket-takers of the series.

When Boult gave New Zealand a great start in the opening game by striking three early wickets, Henry carried forward by sending half of the Australian side into the dugout on the score of 44. Henry then went on to strike three Aussie wickets in the following game including the dismissals of openers David Warner and Tim Southee inside the first two overs of his spell.

Lockie Ferguson (7/10): In the opening, Lockie’s dismissal of Alex Carey was a turning point of the game which broke their 158-run stand for the sixth wicket and brought his nation back in the game.

However, the 31-year-old Auckland pacer still couldn’t make it to the Blackcaps lineup for the following fixture citing fitness issues. Ferguson returned to the action in the final game replacing Matt Henry on the field and dismissing Marnus Labuschagne on 52 who was aiming for the big one.

Tim Southee (6/10): The veteran swing-master toured the neighbouring country to play the 50-over format after six years and returned to his homeland bagging a couple of wickets from two appearances.

Southee was included in the playing XI of the Second ODI in place of Lockie Ferguson and ended up with amazing bowling figures of striking a solitary wicket while giving away only 39 runs. His second victim of the series was the Australian skipper Aaron Finch who was gracing the One-Day International stage for the final time in his illustrative career.