Mustafizur Rahaman bowled brilliantly in the 2015 series against India

With the onset of the 21st century, Bangladesh was aiming to establish itself as not just an associate nation which is there to make up the number in ICC tournaments. The year 2000 saw the Bangla Tigers gaining the Test Nation label and a few wins against heavyweights like India, Zimbabwe, and Australia further helped them become a modern giant.

Bangladesh has all their departments well-covered and has all the capability to beat this Indian team as we witnessed on Sunday. Bangladesh restricted the big guns of India as Rohit Sharma, Shikhar Dhawan, Virat Kohli, and Shreyas Iyer failed to touch the 30-run mark while KL Rahul’s innings of 73 runs helped the visitors post a challenging total of 186 runs.

Skipper Litton Das and Shakib al Hasan helped the home side gain a stronghold on the match but quick wickets from the Indian bowlers saw Bangladesh down and out at a score of 135 for 9 with Mehidy Hasan holding his end till the last ball. Mehidy’s magical innings and Mustafizur Rahman’s resistance helped Bangladesh record another historic win over India.

The good part about the Men in Blue is that they have gone with the strong side which means they are not in the mood to take this series lightly and we can expect some changes in the bowling department for the potentially deciding ODIs of the series.

Over the years, we have witnessed some fantastic displays from Bangladesh against Team India. As the much-awaited series is in full flow, let us take a glance at the few ODIs where Bangladesh have stunned Team India in the past. Here they are:

With some great names in the Bangladesh squad, they stunned Team India for the first time in 2004 when the Men in Blue toured Bangladesh in 2004 under the leadership of Sourav Ganguly. It was the 2nd ODI of the series and the hosts decided to bat first. Though they couldn’t put a big total on the board, some tight bowling helped them clinch the iconic victory.

They scored 229 in their 50 overs and with the help of Aftab Ahmed’s remarkable 67. Credit goes to Masrafe Mortaza’s scintillating cameo towards the end as well. Mortaza picked up 2 wickets to make sure his side could win the game.

For India, only Sridharan Sriram scored a half-century while the rest of the players failed to deliver in the absence of Master Blaster Sachin Tendulkar and the Bangla Tigers recorded their first-ever ODI win at home and first-ever ODI win against India as well.

One of the biggest upsets in the history of cricket came in the 2007 World Cup when India got defeated by Bangladesh in the group game. India after batting first just managed to score 191 in their innings with Sourav Ganguly being the highest scorer for the team. The bowling was so tight that the Indian players were unable to find their rhythm against their left-arm spinners.

Bangladesh, on the other hand, got off to a remarkable start with Tamim Iqbal showing his top-notch performance. Shakib Al Hasan and Mushfiqur Rahim made sure that they would win the game easily. But it was Masrafe Mortaza once again with his 4-wicket haul that actually turned the game in favour of Bangladesh.

Bangladesh spoiled Sachin Tendulkar’s party on this day as the Master Blaster scored his 100th international ton. Team India scored a decent total but luck did not favor the Men in Blue that day. They scored 289 on a flat deck which was great in front of a great bowling attack but Tamim Iqbal and Shakib Al Hasan had some other plans. 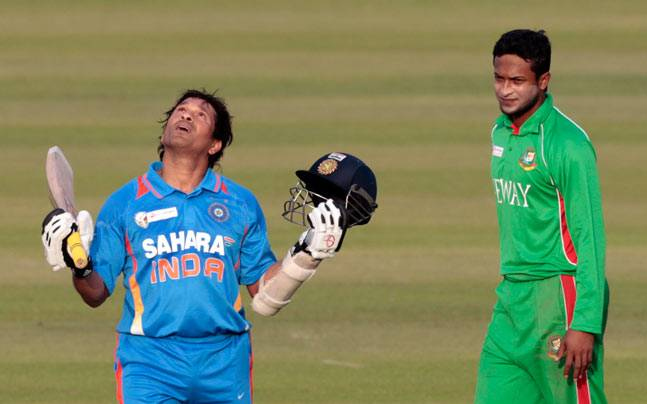 Both of them played fearlessly and helped their side earn a memorable victory over the Indians in the 50th over. Shakib was awarded the Man of the Match for his outstanding performance which could have gone to Sachin Tendulkar that day.

It was a forgettable series for Team India as the hosts were absolutely brilliant against the Men in Blue. The 3-match series started off really well for Bangladesh as they scored a mammoth 308 in their 50 overs, thanks to the half-centuries from Soumya Sarkar, Tamim Iqbal and Shakib Al Hasan.

In reply, India could rack up a mere 228 which was not enough in the end. The game was remembered for the heat-up moment between MS Dhoni and debutant Mustafizur Rahman where they had an elbow match. Rahman took five wickets in the encounter and became Man of the Match.

Another game, another setback for Team India as they were bundled out for 200 runs in the second ODI of the same series. It was a perfect chance for Bangladesh to wrap up the series and they did that in style.

Openers Tamim Iqbal and Soumya Sarkar were off to a flyer and then did not look back. Liton Das and Sarkar continued the momentum after Tamim’s dismissal and took the match away from the Indians. It was a historic series victory for Bangladesh after their remarkable outing down under in the World Cup that year.