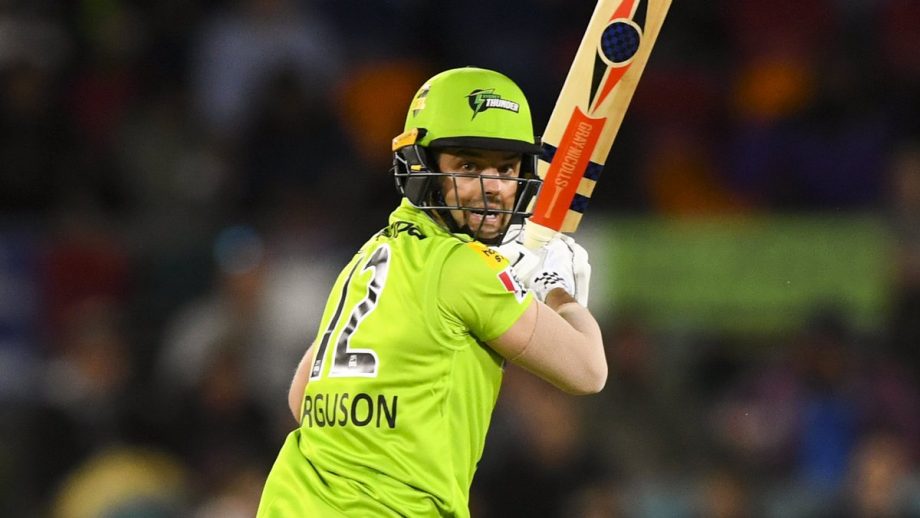 Sydney Thunder won a crucial match from Perth Scorchers on the back of skipper, Callum Ferguson and Ben Cutting at Manuka Oval on Tuesday.

Sydney Thunders made a quick run chase of 3/156 in 19.3 overs with the skipper, Callum Ferguson 61* (53) and Ben Cutting 29* (16) finishing the job with 3 balls to spare. The debutant Oliver Davies also put a significant part towards his side after scoring a quick 36 off 22 balls.

Earlier today, Sydney Thunders won the toss and sent in Perth Scorchers to bat first. The Scorchers put a decent total of 5/152 at the end of 20 overs with Mitch Marsh 52* (41), Cameron Bancroft 34* (26) and Colin Munro 25 (22) leading run-scorers. Ben Cutting, Nathan McAndrew and Tanveer Sangha took a single wicket each from Thunder’s side.

At the start of Scorchers innings, Josh Inglis (4) was the first man to get caught off the bowling of  Nathan McAndrew, caught by the debutant Oliver Davies.

Joe Clarke lost the second wicket of Scorchers after being run-out by Alex Hales following a slow running between the wickets.

Colin Munro gave a hot start to Perth Scorchers but he also lost the wicket after some drama at third-man. He cuts hard the balls outside off and Usman Khawaja leaps for the catch but it slips through the hands and lucky for him that Adam Milne takes the catch in the final attempt.

Daniel Sams takes the wicket of Ashton Turner after he launches a towering sixer, McAndrew takes the catch.

Scorchers moved the scorecard very slowly as they kept losing wickets one after another. The next on the list was Jhye Richardson who was promoted up in the batting order but he only managed to score 5 runs after Tanveer Sangha picked up his wicket, Usman Khawaja took the catch.

While defending, Scorchers were off to a good start after Jason Behrendorff picked up the wicket of Alex Hales on duck in the first over.

Usman Khawaja was having a bit of luck in this match as he nicked a regular catch to the keeper but lucky for him that the Umpire refused to give it out. However, he did not take the benefit of his second life as Aaron Hardie took his wicket on 21 right after that, Behrendorff took an easy catch.

The debutant youngster, Oliver Davies smashed three brilliant maximums to reach 36 but he was tricked by Fawad Ahmed to get him stumped by the wicket-keeper Josh Inglis.

The skipper, Callum Ferguson kept moving forward with all the responsibility on his shoulders and he smacked seven fours and a maximum in his unbeaten 61 runs knock. He was joined by Ben Cutting who put a beneficial part in the partnership after a blistering 29* off 16 balls to seal the victory with three balls to spare.