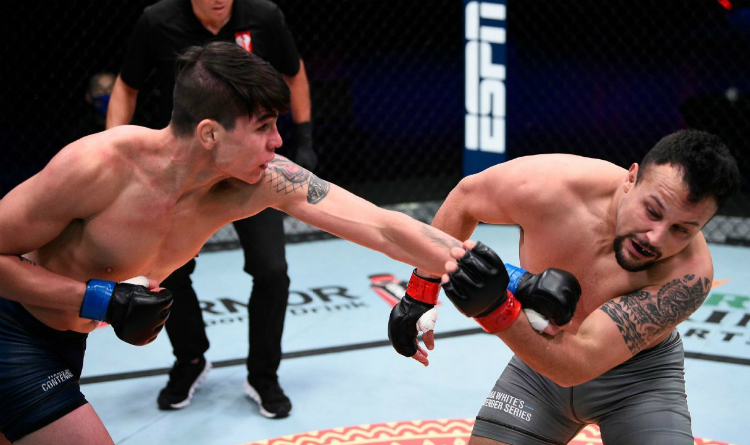 The UFC signed deals with 4 winners of Dana White Contender Series Season 4: Week 8, who defeated their opponents by knockout on November 4.

Light heavyweight Carlos Ulberg with a record of 2-0 faced Bruno Oliveira who had won 8 of 9 bouts. In the first round, Ulberg landed a heavy left hook and dropped his rival to the ground. Carlos is an experienced kickboxer from New Zealand fighting out of Auckland. In August, he helped his teammate Israel Adesanya to get ready for a title bout against Paulo Costa at UFC 253. Therefore, Israel was in Ulberg’s corner at the UFC Apex Arena.

Chilean welterweight Ignacio Bahamondes became the second athlete to sign a contract with the UFC. 23-year old Bahamondes threw a devastating front kick in the second round of his contest against Edson Gomez, which landed right on the rival’s face and crashed him to the canvas. Ignacio’s record currently stands at 11-3 and he is riding on a 2-fight winning streak.

American featherweight Luis Saldana met Vince Murdock inside the octagon. In the beginning of the third round, he scored a clean front kick and finished his opponent with punches getting a victory by TKO. Saldana started competing in MMA in 2011 and amassed a record of 14-6. He has a whopping 100% finish rate (50% by KO/TKO and 50% by submission).

Dana handed out the forth contract to American heavyweight Jared Vanderaa who took on former HRMMA champion Harry Hunsucker. Vanderaa performed a takedown in the first round and showed solid ground-and-pound skills – he stormed Harry with punches near the fence and won by TKO. In his MMA career, Vanderaa gained 11 victories and suffered 4 losses. He is now on a 2-fight winning streak.