Macfarlane vs Velasquez: who will win Bellator flyweight title? 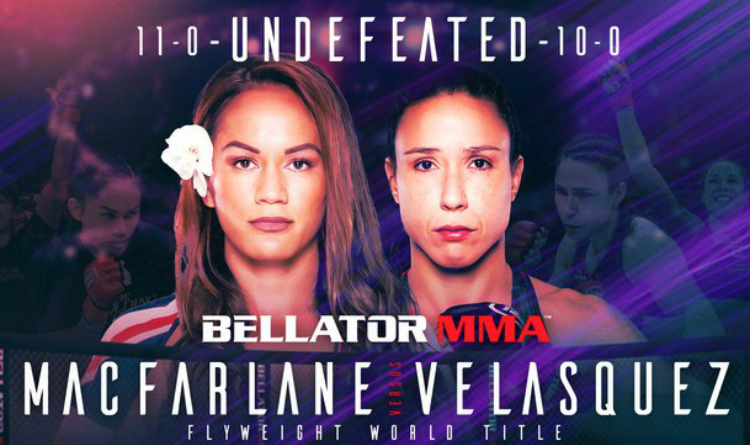 Flyweight champion Ilima-Lei Macfarlane is set to face Juliana Velasquez in the Bellator 254 main event on December 10. Will The Ilimanator defend her title?

Macfarlane started competing in MMA as a pro in 2015. Her current record stands at 11-0. Ilima-Lei transitioned to Bellator from Xplode Fight Series in 2015. In 2 years, she submitted Emily Ducote and earned the flyweight belt. In 2018-2019, The Ilimanator defended the title 4 times and finished 3 contenders before the bouts reached the time limit. Macfarlane set a record for the most victories amongst the promotion’s female fighters (10) and took second place in Bellator in terms of the number of submission wins (6).

Velasquez is also an undefeated athlete. She began her professional MMA career in 2014 and compiled a record of 10-0. The Brazilian beat Rosy Duarte and won the 1RC bantamweight championship in 2015. Juliana signed with Bellator 2 years later. In the promotion, she moved down to the flyweight division, defeated 5 opponents and became the main title challenger. Velasquez gained 3 victories in Bellator by KO/submission. 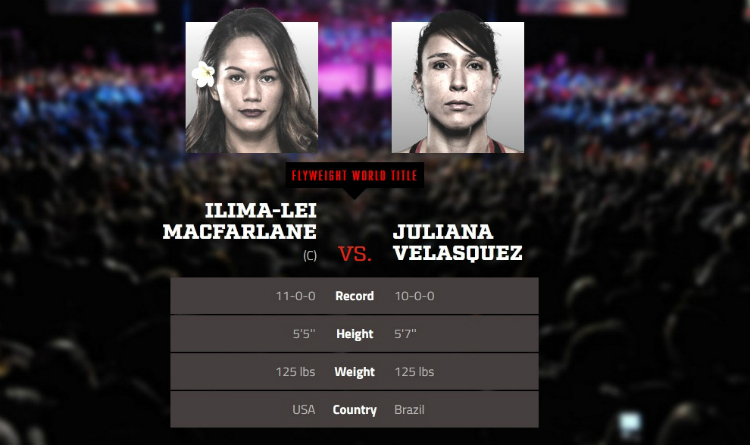 The Ilimanator performs 3 takedowns per 15 minutes with an accuracy of 60%. Juliana takes the fight to the canvas 0.8 times per 3 rounds and finishes only 33% of attempts. Also, Ilima-Lei makes almost thrice as many submission attempts – 1 per 15 minutes versus Velasquez’s 0.35.

Juliana looks better on the feet. She is faster and uses a wider variety of strikes, including knees and elbows. Ilima-Lei coaches in Muay Thai; however, she focuses on punches and rarely throws kicks. The Ilimanator even trained with the P4P king Canelo Alvarez. Therefore, her boxing technique is crisp.

Both ladies are experienced grapplers. Ilima-Lei earned a brown belt in BJJ. Velasquez got a black belt in judo. Nevertheless, Juliana uses her wrestling skills much less frequently and prefers fighting on the feet. Ilima-Lei has a high takedown accuracy and a brilliant strategy on the mat. She effectively uses ground-and-pound to open up her rivals’ defence and catch them in a choke or a lock.

Velasquez will definitely have an edge on the feet due to Macfarlane’s weak striking defence. The Ilimanator, on the other hand, will have an advantage on the canvas. The Brazilian denies 48% of takedowns; thus Ilima-Lei will be able to take the fight to the ground, control her opponent, land some shots and make submission attempts. Therefore, Macfarlane has a better chance to win. Ilima-Lei’s finish rate is 73%. However, Juliana has an edge in striking and a solid wrestling background. She has never been knocked out and forced to tap. Given these factors, Ilima-Lei will likely win by decision.