Ferguson vs Oliveira: does Do Bronx have a chance to beat El Cucuy? 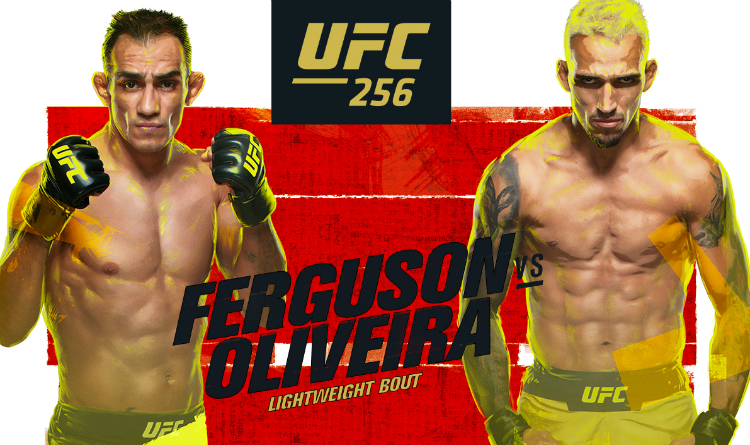 Ferguson to take on Oliveira

Lightweights Tony Ferguson and Charles Oliveira will fight in the UFC 256 co-main event on December 12 in Las Vegas. Does Do Bronx have a chance to beat El Cucuy?

Ferguson started his professional MMA career in 2008 and amassed a record of 25-4. In 2010, El Cucuy became the PureCombat welterweight champion and transitioned to the UFC. In his debut bout, Tony won The Ultimate Fighter 13 welterweight tournament. Then he moved down to lightweight and was looking forward to challenging the reigning king Benson Henderson but was stopped by Michael Johnson in 2012. Ferguson got a title shot 5 years later. He submitted Kevin Lee in a showdown for the interim belt. Nevertheless, he was stripped of the title due to an injury. In May 2020, Tony faced Justin Gaethje in a bout for the interim belt but lost by TKO. El Cucuy is currently ranked third at lightweight.

Oliveira began competing in MMA in 2008. His record stands at 29-8, 1 no contest. Do Bronx won the PFC Grand Prix in 2008 and signed with the UFC 2 years later after gaining victory in 12 consecutive clashes. In 2010-2017, Charles suffered 8 losses and was out of a championship race. However, in 2018 the Brazilian rebooted his UFC career. He beat 7 opponents in a row. In his previous contest, Charles made an upset by defeating Kevin Lee and took seventh place in the lightweight division. Oliveira set the record for most submissions and “Performance of the Night” awards in the UFC. 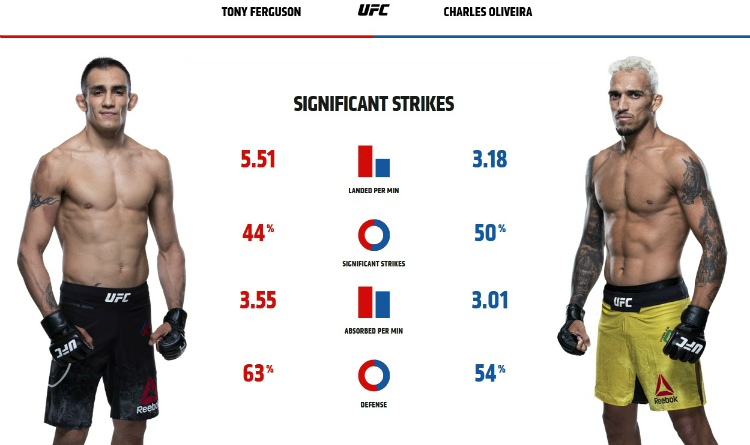 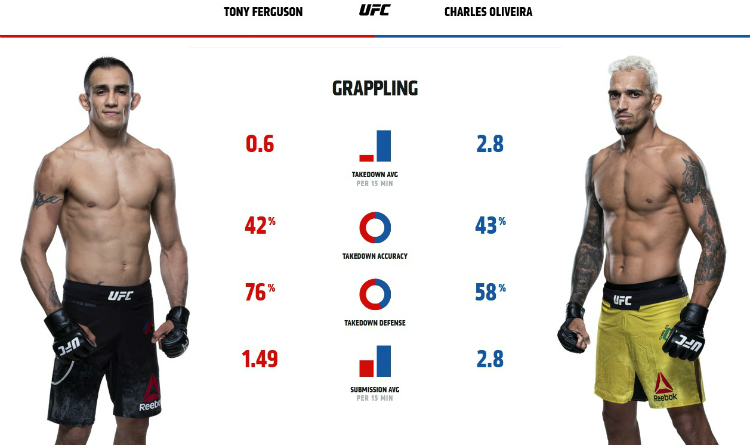 Both contestants trained in boxing and Muay Thai. Therefore, their striking styles are similar. They throw various knees, elbows, kicks and have fast hands. But Ferguson is a more creative and explosive fighter. Charles can also take his opponents by surprise with extraordinary strikes, for example, flying knees. However, El Cucuy is a real master of unpredictability.

Ferguson participated in NCWA Wrestling tournaments and earned a black belt in BJJ. Oliveira received a third degree black belt in BJJ. Thus, Do Bronx is a more proficient Jujutsu-Ka. Tony prefers fighting on the feet and rarely initiates grappling exchanges. Charles, on the contrary, focuses on ground game and is a true submission expert.

El Cucuy has an edge on the feet, while Do Bronx is superior on the canvas. Tony has a solid takedown defence, but Charles finishes 43% of attempts. Therefore, he will definitely be able to bring the fight to the canvas. In this case, the Brazilian will neutralize Ferguson’s forte and take a lead. Considering Oliveira’s advantage is wrestling, he has a better chance to win the clash.

Oliveira has a whopping 93% finish rate, but Ferguson has been stopped only twice. Tony is a high-level BJJ artist and has an incredible ability to take shots. Justin Gaethje, who has a great deal of gunpowder in his hands, had been savagely beating up Tony for 23:39 before the judge intervened. Thus, Ferguson is very hard to be finished. Given these factors, the showdown will likely reach the time limit.