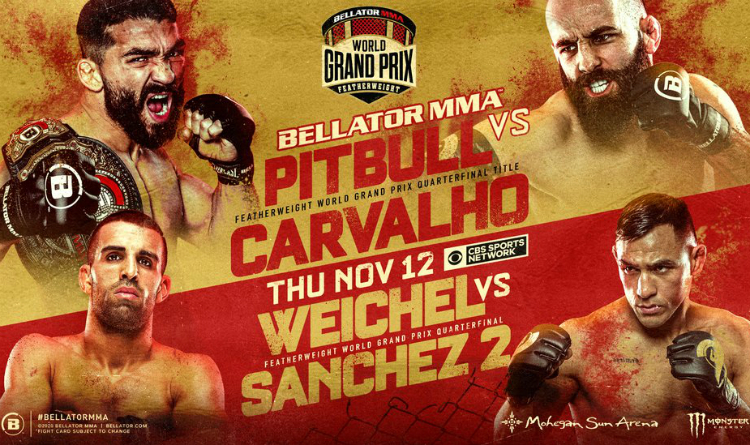 Bellator continues a series of American events with Bellator 252 headlined by a featherweight Grand Prix bout between Patricio Pitbull and Pedro Carvalho.

When and where will Bellator 252 take place?

The competition is scheduled to be held at Mohegan Sun Arena in Uncasville, Connecticut. Prelims start at 05:00 PM ET on November 12, the main card begins at 07:00 PM. All bouts will be aired live on CBS Sports and in The Bellator Next Gen Global App.

The main card will be opened by a welterweight contest between Yaroslav Amosov and Logan Storley. Both athletes are undefeated: Amosov is on a stunning 24-fight winning streak, while Storley gained 11 consecutive victories. Yaroslav has already defeated 5 opponents in the promotion, Logan has stopped 6. Therefore, the winner of their clash will likely face reigning champion Douglas Lima. 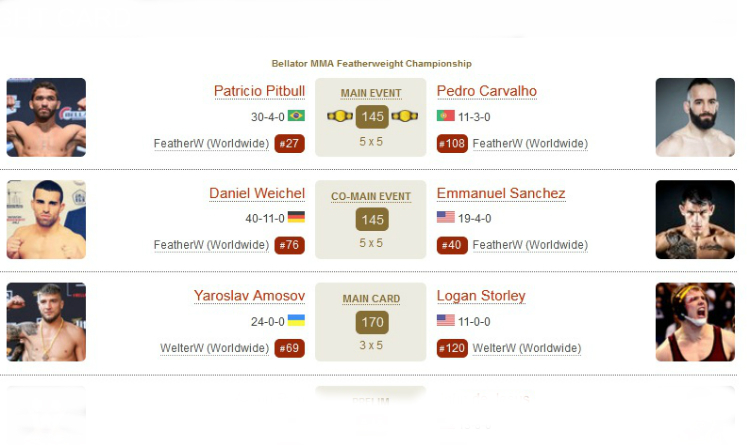 Featherweights Daniel Weichel and Emmanuel Sanchez will fight in the first featherweight Grand Prix Quarterfinal (FGPQ). Weichel won his last bout and cut off a 2-fight losing streak. Sanchez beat 2 last rivals and is a sizable favorite. He is 5 years younger but Daniel has had almost twice as many contests in MMA (51 versus Emmanuel’s 23).

The second FGPQ between Patricio Pitbull and Pedro Carvalho is booked for the main event. Pitbull is riding on a 5-fight winning streak, while Carvalho has been victorious in the last 6 bouts. Patricio is a huge favorite and has a great chance to finish his opponent before the clash reaches the time limit. Winners of Freire vs Carvalho and Sanchez vs Weichel will meet inside the cage in Grand Prix Semi-finals.

Amanda Leve and Kara Lynn Hoad will make their professional debut in MMA. Hoad compiled a record of 4-1 as an amateur. Leve competed in grappling and won 7 of 8 clashes. All fans of striking matches should pay attention to Roman Faraldo. He defeated 6 rivals in a row as an amateur and finished 3 opponents as a pro. Faraldo will debut in Bellator against Casey, who is coming off a 2-fight losing streak. These guys will definitely put up a fierce battle.