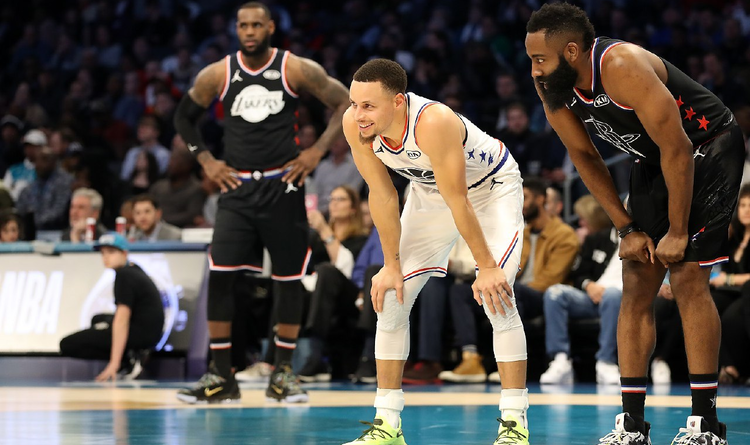 Stephen Curry (30) of the Golden State Warriors and James Harden (13) of the Houston Rockets during the third quarter of the NBA All-Star game on February 17, 2019. Spectrum Center, North Carolina

The 2020-21 NBA regular season began with several record-breaking debuts from star players. Warriors point guard Stephen Curry became the fastest NBA player ever to hit his 2,500th career 3-pointer, and James Harden finally joined the Rockets and became the first NBA player to score more than 40 points and 15 assists in his first match of the season.

“My conditioning could be better”

The 2020-21 NBA season is expected to be very exciting and unusual. Starting the tournament after the 2029-20 season with its extremely strict rules, bubble environment, and the shortest offseason in NBA history means having a lot of fresh and fully recovered players who didn’t get close to the Finals and tired superstar players with their teams that took part in the final and semi-final games. That is why it is not very easy to make any predictions for the upcoming season. It already surprises everyone with top NBA teams losing in their first matches of the season and with star players breaking records right after the pre-Christmas start.

The first record-breaking performance of the 2020-21 NBA season was made by Stephen Curry of the Golden State Warriors. The superstar point guard and his team demonstrated their Championship potential in the game against the Chicago Bulls on December 27 and got their first win in the 2020-21 regular season. While Stephen Curry is without a doubt one of the best NBA players and the Warriors are believed to be one of the contenders for the NBA title in the 2020-21 season, Curry’s record-breaking debut might be the beginning of their path to the Championship.

The 32-year-old player became the third person in the National Basketball Association to reach 2,500 3-pointers during his sports career. After breaking the record in just 702 games, Curry is also the fastest player ever to hit that many 3-pointers, overtaking legendary Reggie Miller and Ray Allen. Despite the fact that Stephen Curry is still an active player and doesn’t seem to have any intentions to end his career, the superstar now needs to score just 60 more 3-pointers to have the highest number of 3-pointers in NBA history.

Another impressive 2020-21 debut performance was made by James Harden, who managed to become one of the most scandalous players this year. Even though Harden can not beat Curry’s record, he is still on the list of the League’s greatest shooters, and James himself believes that he has no future with the Houston Rockets. He caused a scandal by trying to leave the franchise and join any champion-level team, but to no avail. After weeks of controversy, rejections, and loud headlines, Harden eventually played with the Rockets in one of the first matches of the new season and showed wonderful results. Joining his first regular-season game right after a 4-day quarantine and scoring 44 points and 17 assists, Harden helped his team to compete with the Portland Trail Blazers and became the first player in the League to score more than 40 points and 15 assists in his first match of the season.

Breaking one more NBA record is very important for James Harden because it proves that the star player is still one of the best scorers and is worth trading. This achievement gives Harden an opportunity to finally leave Houston and have more chances to get another title as soon as possible. The player himself shared his thoughts on the impressive debut:

“It was all right. Too many turnovers. But other than that, first game playing 40-something minutes, I feel like my conditioning could be better, obviously, but it was pretty solid. I think we let them get away from us.”

Even though Harden managed to score 44 points, it was not enough to cover the team’s Covid losses(6 players positive), and the Rockets were defeated 126:128 by the Portland Trail Blazers. But there is hope for Harden to get a new contract that he will be satisfied with and continue his NBA journey with another franchise.

As there is no doubt that Harden and Curry will impress everyone with more records, 2021 will show if these superstar players are going to become even better during this unusual NBA season.