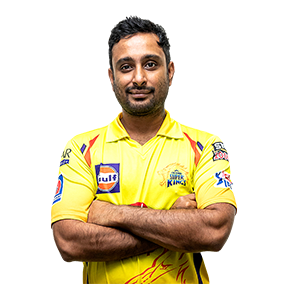 Ambati Rayudu is an Indian cricketer who represents the country at the International stage. He plays as a right-handed middle-order batsman, occasionally keeps wickets, and bowls right-arm off-breaks. At the domestic level, Rayudu represents Hyderabad and plays for Chennai Super Kings in the Indian Premier League.

The record of scoring double century and a century in the same Ranji match is registered in the name of Ambati Rayudu. He started his cricket journey playing for Hyderabad youth teams in the late 1990s and played at U-16 and U-19 levels. He captained the Indian U-19 team in the 2004 Under-19 World Cup held in Bangladesh. Under the captaincy of Ambati, the Indian team became semi-finalists.

For IPL 2011, Mumbai Indians picked the right-handed batsman, and he helped his team create a gigantic score in many matches. After playing for eight seasons for MI, he was bought by MS Dhoni-led Chennai Super Kings, where he scored 602 runs for the team. However, IPL 2019 didn’t go well for Rayudu, but the fans are expecting a comeback from him in IPL 2020.

He was born on 23 September 1985 in Guntur, Andhra Pradesh. His father’s name is Sambasiva Rao, and mother’s name is Vijayalakshmi. Ambati tied the knot with his friend Cennupalli Vidya on 14 February 2009.