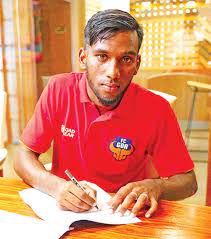 Born in Dindigul, Tamil Nadu Romario began his career with Arrows FC. He started his professional career with Chennai City FC in the 2017-18 Hero I-League season, Alexander Romario Jesuraj was signed by FC Goa after a successful 2018-19 season where he won the trophy with his club. Later in the season, he was sent out on loan to Mohun Bagan AC for the 2019-20 season and went on to win his second consecutive Hero I-League trophy. Having been retained by his parent club ahead of Hero ISL 2020-21, Romario will be looking to make his debut for FC Goa.